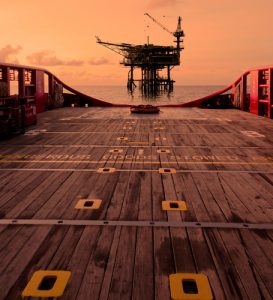 In 2009, not long after President Obama declared the creation of an offshore wind energy industry a national priority, shipping industry lobbyists began working to block it.

When the U.S. Interior Department began an accelerated leasing process the following year “to facilitate siting, leasing, and construction of new [offshore wind] projects,” lobbyists from the American Waterways Operators (AWO) – an association of tugboat, towboat, and barge companies that derive substantial income from transporting chemicals and petroleum products that also affiliates with some of the largest oil and gas polluters in the world – leveraged a close partnership with the U.S. Coast Guard to push for a study ostensibly designed to safely integrate shipping and offshore wind.

The American Waterways Operators appears to have then used the study to push its anti-offshore wind agenda.

Now, AWO is working with the Coast Guard to ensure the study’s recommendations become official policy for the siting of all future wind energy areas. If successful, that could hobble the growth of offshore wind energy for years to come.

For the last six months, we’ve been trying to obtain answers from the Coast Guard to a number of important questions about its offshore wind energy study, including who was on the Working Group.

Although the Coast Guard still refuses to answer most of our questions and to acknowledge our appeals of their denials of lawful records requests, Coast Guard media relations officer LT Katie Braynard us this email in early August. It reads in part:

Yet, we know this is not true.

In the Summer 2015 issue of Proceedings: The Coast Guard Journal of Safety and Security at Sea, AWO’s Chief Operating Officer Jennifer Carpenter wrote,

“AWO has been actively involved in developing the Atlantic Coast Port Access Route Study [ACPARS] (a comprehensive analysis of the navigational impact that offshore wind projects will have on maritime safety on the East Coast).”

This aligns with information we received from a source close to the study’s Working Group who told us that “Jennifer was very engaged.”

In January 2011, four months before the study’s Working Group was chartered, an article in the Professional Mariner noted AWO had been expressing concerns about offshore wind and the need for navigation fairways for almost two years.

The next month, AWO, among others, sent a letter to Admiral Robert J. Papp, Jr., Commandant of the Coast Guard, that reads:

“We request that the U.S. Coast Guard expeditiously seek to exclude proposed areas that would risk the safe navigation of vessels carrying America’s waterborne commerce. Positioning fixed wind turbines in close proximity to shipping lanes and in the pathway of oceangoing vessels is not something that should be contemplated under any circumstances.”

Three months later, in May 2011, the Coast Guard chartered the ACPARS Working Group “to determine if new routeing measures or changes to existing routeing measures were necessary to balance the multiple uses of the waterway, while ensuring the safety of navigation.”

Only three months later, in August 2011, Coast Guard official George Detweiler stated in a U.S. Coast Guard Task Force document that the Coast Guard could “recommend that BOEMRE [Bureau of Ocean Energy Management, Regulation, and Enforcement] remove any blocks included in the Call area from consideration for leasing and potential development, or consider potential mitigation measures for blocks that are made available for development.

In The Virginia Pilot, “The Coast Guard added, ‘The impact to safe and efficient navigation appears to be significant, although not yet characterized.’” The article also noted that “Offshore wind developers expressed worry that their projects could be stalled.”

The Working Group came out strongly against offshore wind’s prospects, despite not having the necessary navigation data, known as Automatic Identification System, to support its assessment in the Coast Guard’s Interim Report, released July of 2012.

This is notable because in its letter to Admiral Papp Jr., AWO managed to simultaneously argue the Coast Guard should be the agency to perform the AIS analysis and that “Exhaustive analysis is not needed.”

In an article about the study, retired Coast Guard Captain and study Co-chair Dana Goward wrote earlier this year:

“In other ways the study fell short. While it did improve the Coast Guard’s understanding of how to use AIS ship tracking information, the effort failed to develop the analytic and planning tools it said were needed for continued development of coastal waters.”

Yet these shortcomings didn’t stop AWO’s and the Coast Guard’s steady drumbeat against offshore wind.

This includes the formation of an Alternative Energy Response QAT (Quality Action Team) in late 2013 designed to “allow the Coast Guard and industry to work together to alleviate the threats to navigation posed by the citing of offshore wind energy projects.” Present at this meeting were John Harms, AWO Atlantic Region Manager, and CAPT Danny Leblanc, LANTAREA Chief of Prevention.

In another article, former Co-chair Goward wrote about the offshore wind study in 2014:

“[G]overnment-only task forces proposing wind energy areas are dominated by folks who know little, if anything, about marine transportation and are tasked with making as much coastal water as possible available for wind energy. Which is another way of saying ‘reserve as little of it for shipping as possible’.”

Meanwhile, Detweiler and Project Manager Emile Benard traveled to numerous meetings and events warning offshore wind developers and advocates about the possibility of dramatic cutbacks in WEAs because of the Coast Guard study, which created a chilling effect throughout the offshore wind industry, according to our sources.

Typical of the Coast Guard’s outlook on offshore wind is what Mr. Benard told The Baltimore Sun in May 2013:

“Depending on the results, the Coast Guard may ask for a buffer zone of one to five miles — which at the outside could put most of the Maryland offshore wind area off limits.”

Ms. Carpenter hails the “shared vision” of the Coast Guard and American Waterways Operators in her 2015 “Proceedings” article. In the spirit of this partnership, the Final Report, released in March 2016, details the key role AWO played in shaping the Working Group’s recommendations, which make offshore wind unviable on the Outer Continental Shelf (OCS).

Yet the Coast Guard spokesman insists there was “no external participation.”

The only step left is implementation, which, according to Mr. Detweiler has already begun. This includes incorporating:

“the planning guidelines as policy into ‘appropriate publications or documents.’ These could include Commandant Instructions, manuals, Navigation and Vessel Inspection Circulars (NVIC) and policy letters.”

Since the study was released in March, not one new Wind Energy Area has been leased.

The U.S. Coast Guard chose to ignore President Obama, the success of Europe, and the rationale that underlies the clean energy of offshore wind and instead to follow the lead of AWO lobbyists.

American Waterways Operators has never hidden its anti-offshore wind agenda. But in an August 2013 letter written to the Bureau of Ocean Energy Management (BOEM), AWO lays bare the profit motive behind its antipathy to offshore wind. The letter reads in part:

“Developing additional offshore wind energy projects in Delaware and New Jersey could severely disrupt offshore and near-shore vessel operations on the Atlantic coast. A significant portion of the region’s chemical and petroleum goods are moved by tug and barge from Norfolk, Baltimore, and Philadelphia to New York, Boston, and points north. The proposed WEAs offshore of Maryland, Delaware, and New Jersey will have a substantial impact on this trade.”

And AWO is more than willing to work with fossil fuel polluters, big and small, to advance its agenda.

In February 2015, AWO and The Portland Pipe Line Corporation (with the support of American Petroleum Institute) sued the the City of South Portland seeking to overturn the city’s “Clear Skies Ordinance (Ordinance #1-14/15) which effectively bans the loading of piped crude oil onto tankers in South Portland’s deep-water harbour.”

A robust U.S. offshore wind energy industry is in direct conflict with the profits of the tugboat, towboat, barge, chemical, and petroleum industries. Coast Guard leadership apparently decided to follow the lead of its long-time friends. When viewed through this lens, it is easy to understand why the Coast Guard refuses to provide information about a study with major implications for the future of renewable energy, paid for by U.S. taxpayers.