In October, we posed a series of questions to Penn State Provost Nicholas Jones about the School of Hospitality Management’s (SHM) and Professor John W. O’Neill’s relationship with the hotel industry lobby. On November 9th, the University finally responded in a letter from Vice President Neil Sharkey.

“All university personnel are responsible for research disclosures as defined in the policies,” wrote Sharkey after laying out the relevant ethics policies.

We already were aware of the university’s ethics policies. In fact, we’ve written about them several times. 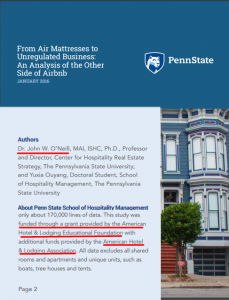 Our reporting finds overwhelming evidence that Professor O’Neill is not only operating a private consulting practice on Penn State’s campus, but also using the imprimatur of the University to provide credibility to corporate-funded research on behalf of his current clients.

Both appear to be in clear violation of the University’s ethics standards. We hope that Professor O’Neill and Penn State will uphold their commitment to transparency and accountability and take these apparent ethical violations seriously.

During the summer of 2015, Regis Becker, Penn State’s first chief ethics and compliance officer, wrote a letter to the editor of the Centre Daily Times. He “urged ‘anyone who has witnessed or suspects illegal, unethical or unsafe conduct to report it promptly so that it may be addressed’ and stated that ‘the university will not tolerate wrongful conduct.”

So, today we sent a letter to the Dean Crouter of the College of Health and Human Development, of which the School of Hospitality Management is a part, that provides evidence to support our assertion and asks her to address O’Neill’s wrongful conduct. 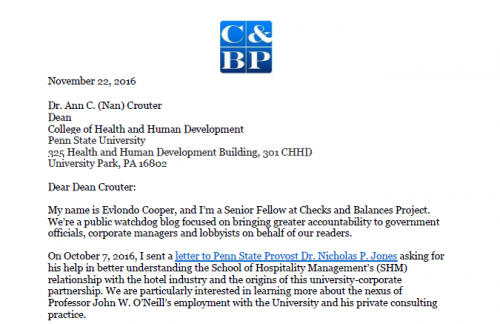 To read the entire letter, click on the image or HERE.