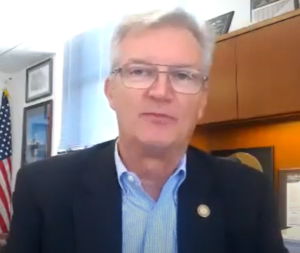 On May 27th, the national publication, Becker’s Hospital Review, reported on negative comments by doctors concerning the proposed $11.5 billion merger between Sentara Healthcare and Cone Health of North Carolina. On the same day, Sentara announced that Virginia Secretary of Finance Aubrey L. Layne, Jr. would join the health care giant in the newly created role of chief of staff.

Layne has served as Virginia Governor Ralph Northam’s finance secretary since Jan. 14, 2018. Not wanting to wait until Northam leaves office next January, Layne will join Sentara on July 1 – just in time to help rescue the Cone Health merger, which may be in serious trouble.

As reported by Becker’s:

“State Attorney General Josh Stein’s review of the proposed deal is required by North Carolina law for charitable corporations selling a majority of assets. His approval isn’t required, but his office could sue to intervene in the merger.”

Who better to appeal on Sentara’s behalf with North Carolina’s Attorney General than the former Virginia finance secretary Aubrey Layne? Both men are Democrats.

Layne will be in charge of Sentara’s legislative affairs.

On the federal level, the Federal Trade Commission (FTC) is examining the merits of the merger. Checks and Balances Project and others have requested an FTC investigation. The FTC responded to us by asking for more information and confirming it is reviewing our request for the FTC probe.

For more than 30 years and through the administrations of six presidents of opposing political parties, the FTC has criticized Certificate Of Need laws (CON, another name for Certificate of Public Need, or COPN) as anti-competitive, rife with lobbying influence, and ineffective in slowing the rise of health care costs.

Sentara has succeeded in using the COPN process to weaken its remaining competitors in the Hampton Roads area – including Bon Secours and Chesapeake Regional Medical Center. Chesapeake has two lawsuits outstanding against Sentara. One has been appealed to the Virginia Supreme Court. The other accuses Sentara of trying to wipe out Chesapeake’s cardiology business and asks for $20 million in damages.

In another case highlighted by C&BP’s reporting, Sentara’s objections damaged Bon Secours’ attempts to restructure 165-year-old DePaul Medical Center, leading the closure of DePaul in April 2021. DePaul was located Norfolk, Virginia, and had the highest rate of charity care in the state.

“These were patients that we were seeing in public housing who had needed orthopedic procedures performed, most commonly, a total knee or a total hip replacement. Their doctors had them go up to VCU up in Richmond to get that pro bono care, and I asked, VCU? Why didn’t you…. ‘Sentara don’t give nobody nothing,’ is what I heard so many times.”

We asked Sec. Aubrey Layne and Sentara spokesperson Danya Bushey for comment on this report. We have yet to receive a reply from either.

C&BP previously obtained public records from Eastern Virginia Medical School (EVMS) that included a summary of a call initiated by Secretary Aubrey Layne with EVMS Rector Dr. Theresa Emory. The call took place on November 25, 2020. The records indicate that Governor Northam attended a hastily organized meeting on July 27 on the roof of the Dominion building in Norfolk that was called by Virginia political mega-donor and billionaire John “Dubby” Wynne. Wynne had sought the meeting to discuss and potentially finalize an arrangement sought by Sentara’s Kern to merge EVMS with Old Dominion University (ODU), a public institution, where costs would be covered by Virginia taxpayers. ODU has never had a medical school.

Layne told Emory that some of the parties involved had already sought $15 million in annual state funding for EVMS’s operating costs. But Layne had not put any money into the state budget and would not do so.

In the call summary, Emory wrote that she told Layne:

“How is it that the richest health system in the country, for its size, is sitting in the area with some of the worst health disparities in the country? How is that not a problem for the state? The African-American community is being hit disproportionately by the pandemic and all Sentara seems concerned about is unloading the institution that is serving the local community, in the middle of a pandemic so they can have a clean slate when they merge with Moses Cone.”

The timing of Sentara’s announcement on August 12 of a $11.5B merger with Cone Health, which Kern would helm, raises questions that persist to this day.

Sentara registered with the IRS as a tax-exempt nonprofit charity but has net assets of $8 billion. CEO Howard Kern received $8 million in compensation in 2019.

C&BP has been probing how the health care giant, as it attempts to expand further into North Carolina, uses lobbying and influence to crush competitors, the lengths it goes to do that and the impact on average citizens.