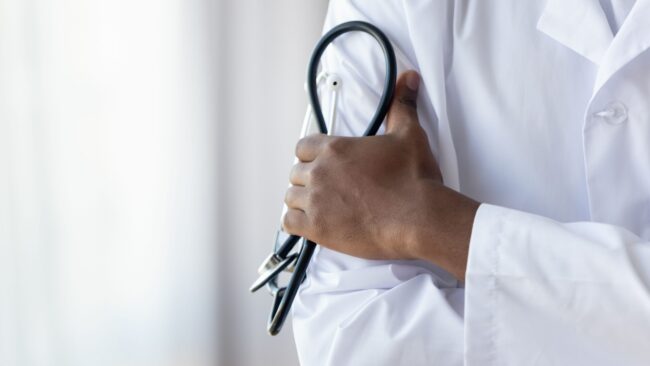 “Low-income people are going to suffer…. DePaul should never have been made to close.”

Today, Checks and Balances Project begins a new series that we’re calling “Local Voices” in which we will hear from a range of people with views on health care in Hampton Roads and Virginia. Our first conversation is with a Registered Nurse with more than 20 years of experience, who asked not to be identified due to fear of professional retribution by Sentara. The following transcript has been lightly edited for the sake of brevity.

C&BP: You wrote that our next mobile billboard should say, “We don’t care. We don’t have to care. We’re Sentara. Where else are you going to go?” What did you mean by that?

Nurse: Sentara, now, is pretty much a monopoly in the area, Virginia Beach. Bon Secours has a few little facilities, but nothing substantial. On the peninsula, they still have Mary Immaculate, but in Norfolk, up there, DePaul is closing. Virginia Beach, there’s nothing really. Portsmouth, there’s still [Bon Secours] Maryview, but that’s… It’s otherwise known as Murderview now. I’ve got patients that say, “I’ll stay here and die. Don’t send me back there.”

It’s gone downhill. So basically, your options are Sentara or Sentara. And with the decline in the standards of care that I’ve seen over 20 years, there’s really nothing people can do. They don’t have an option to go anywhere else.

C&BP: We’ve learned about some very large charges on patient bills. $1,500 for an operating room fee at a clinic, $6,300 for a body scan. Does that surprise you?

Nurse: If you don’t have insurance, it’s non-negotiable, at this point in time. You’re sick, they kind of have you, so you need care and they’re free to charge you whatever [they] want. It’s not like you can sit there and negotiate how much they’re going to charge you beforehand.

I challenge anybody to call up a hospital and say, “Hey, I need to have my gallbladder taken out. I need to have my appendix taken out. I’m going to be paying cash for this. I’m trying to get three competitive bids and see which hospital I’m going to have it done at.” Nobody can tell you. They have all that stuff. They wouldn’t give you a ballpark. So, they’re free to charge you whatever they want. And based on the bills I’ve seen…

One time, when I was changing jobs, I knew insurance hadn’t kicked in yet. And I wound up going to the ER, and the bill I got was about between 300-400% of what I normally get from Sentara for that same liter of fluid, two rounds of Dilaudid, one round of a Zofran, an ultrasound of the kidney, because I asked for them not to do the CAT scan because I don’t have insurance. So, they were able to do it with an ultrasound.

But then, if you call them to negotiate, they’ll take 20% right off the top of the bill if you call them and negotiate them. So, anybody who’s in a business, if you can just write off 20% of something, just if people call you, that tells me that they’re overcharging. And based on what my normal co-payments would be and what I normally see for that ER visit, they were charging me between 300-400% of what I’m usually charged. So, if you don’t have insurance, you’re charged whatever they want to. 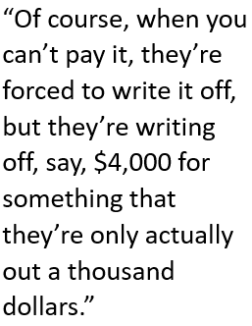 Of course, when you can’t pay it, they’re forced to write it off, but they’re writing off, say, $4,000 for something that they’re only actually out a thousand dollars, but they can say we wrote off this much in indigent care. It’s a nice way to stay nonprofit.

C&BP: One of the things that we’ve been trying to understand is how could a nonprofit, well, a non-taxable or untaxed company like Sentara accumulate $6 billion in net assets? And could this be one of the ways?

C&BP: You operate in Norfolk and Virginia Beach?

C&BP: DePaul Hospital was for generations a place where the less fortunate could get charitable care. Now that DePaul has closed, do you have a sense of how low-income communities have been affected?

Nurse: Basically, is that they’re forced to go to Sentara now, which has grown to, I mean… Years ago, when you got sick, you went and you came in when you had a real medical emergency. You went to the ER. The doctor deemed that you needed to be admitted. The attending who would be taking care of you in the hospital reviews it and agrees and says, “Yes, admit him to my service.” You get wheeled upstairs, and you go into your bed. I mean, that’s how it was when my gallbladder needed to be taken out.

Nowadays, they’re holding people in the ER, waiting for beds, for 10, 12, 36 hours, sometimes longer because there’s no beds in the hospitals. Funny that we’re losing hospital capacity at the time when we don’t even have enough beds as it is. So, that’s just going to increase the strain on the resources of the existing places like Norfolk General, and it’s going to make it that much worse.

I mean, people have walked out of the waiting room, had somebody drive them home, and would call 911 to take them back to the hospital via ambulance, hoping they could get seen faster. I’ve seen that happen.

Nurse: The patient comes in from the EMS, and they look in the computer, and the patient’s already been registered four hours ago. So, I mean, I’m not making that stuff up.

With DePaul closing, there’s really not, and if you look geographically where DePaul Hospital sits — what other options are there for people? There’s [Sentara] Norfolk General. Maybe they could go over to [Sentara] Leigh Memorial, but that’s pretty much it.

Low-income people are going to suffer, and they’re going to be getting more things like people coming into the ER giving bad names, bad addresses, bad phone numbers.

“I don’t have my driver’s license with me. I must have lost it, but this is my name. This is my address.” And they just tell them something to get in there, and they can’t pay the bill if they can’t find you. DePaul should never have been made to close.

C&BP: You mentioned to me in our previous conversation how some patients go to VCU, which is 90 to 100 miles away to get care. Why would they do that?

Nurse: These were patients that we were seeing in public housing who had needed orthopedic procedures performed, most commonly, a total knee or a total hip replacement. Their doctors had them go up to VCU up in Richmond to get that pro bono care, and I asked, “VCU? Why didn’t you….” Sentara don’t give nobody nothing,” is what I heard so many times.

These were not people who would be able to give me accurate details, things about why. They just knew that they couldn’t get it at Sentara, so their surgeon was able to get it for them at VCU, but it was not uncommon.

We have one patient two years ago for the left knee, and now we got him back again two years later for the right knee, both at VCU, both under indigent care. And both of them saying Sentara won’t do this for them, but VCU will.

I have worked at Community Hospital in Richmond. They have a very large indigent population. They did 10 years ago when my contract company would have openings there. And it was literally St. Elsewhere. This was a very small community hospital, understaffed, no resources, but it could serve that population more cost-effectively than any of the bigger hospitals. So VCU is managing things well enough that they can not only do those patients but take on patients from the Hampton Roads area too.

But we’ve got this huge ass nonprofit down here who’s got Norfolk General, Beach General, Leigh Hospital and they can’t seem to do this. They cannot manage it with this equipment. So that’s something that never made sense to me. And I know the patients are grateful as anything that VCU could do this for them, but it always raised so many questions. Well, why can’t the nonprofit down here do that?

C&BP: Okay. Thank you. There does appear to be some level of fear and trepidation among healthcare professionals we’ve spoken to. Many of them will talk to us, but they just don’t want their names used. Do you think that’s justified?

Nurse: Well basically, who can you work for in healthcare in Tidewater? You can work for Sentara. You might be able to work for Chesapeake General. Bon Secours is quickly fading out of the area. DePaul’s closed. Lord knows what’s going to happen with Maryview in the next couple of years. Portsmouth General’s gone. There may be a couple of home health companies you could work for as a RN, LPN, physical therapist, but basically you’ve got Sentara. So that’s not a bridge people really want to take a risk of burning. Traffic is horrible to get from the south side up to the peninsula, but you could go up to maybe a Riverside facility up on the peninsula or Mary Immaculate Hospital, but that’s a long commute. We used to have Obici Hospital, but Sentara acquired that also. Basically, you’ve got Sentara, that’s it.

C&BP: Sentara is a tax exempt, not for profit, charitable institution that pays its CEO $8 million a year. Any thoughts about that?

Nurse: It is just undefendable to me that someone who is trying to manage a healthcare system, especially these days, is taking such huge salaries. When COVID happened, people were not getting raises. They were actually getting some temporary salary cuts because the hospitals were so overwhelmed, it was costing them so much money. I don’t think … Any of the executives feel that pinch? To me, it’s just indefensible that people who are supposed to be stewarding these organizations for the benefit of ill people make so much money.