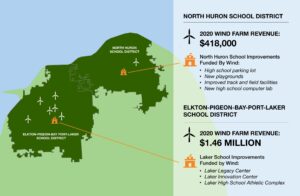 First, we had to learn how many school districts are in the county and their boundaries. Many covered multiple townships.

Second, we learned the exact locations of each wind farm in the county and the locations of the turbines. We used locations from this site: https://www.thewindpower.net/

Third, we filed a Freedom of Information Act request with the Huron County treasurer’s office to find out how much each district received in 2020 from wind energy. Those records showed that two districts — Elkton-Pigeon-Bay Port-Laker and North Huron — received the most money.

Finally, we confirmed we understood how wind turbine money support local schools. Michigan law says property tax money collected from wind turbines can’t be used directly to pay for school activities, such as teacher salaries or operating costs. The money can only be used to pay off debt from bond issues or into so-called sinking funds approved by voters.

Elkton-Pigeon and North Huron records show the details of three bond issues approved by voters in May 2018, including the specific projects the bond issues were intended to support.

Some of the project supported by the bond issues include: