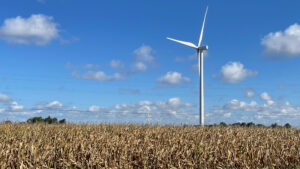 As the nation lurched toward a financial crisis in 2007 and 2008, leaders in central Michigan’s Gratiot County say they realized then that they had a lifeline to economic stability: Embracing wind energy.

They used the county’s planning process to allow the placement of wind farms throughout Gratiot County. These wind farms now provide at least $8.3 million a year to local governments and schools.

“We were dedicated to preserving open space and farmland, and we also had an evolving industrial sector that had been struggling for many years,” said Don Schurr, who was then-head of Greater Gratiot Development Inc., the county’s economic development agency. “Then we had a chance to expand our economic base with wind energy.”

“It turned out to be a great thing for agriculture. Hundreds of farms have been involved, and they’ve benefited economically from participating. It really provides a budgetable income that farmers can count on,” Schurr said. “It’s a buffer for the constantly changing prices of commodities. It’s allowed farmers to weather bad years, and in good years it’s provided money to help them buy new equipment, fix up their homes and buy a pickup. They’re not totally dependent on commodity prices all the time.” 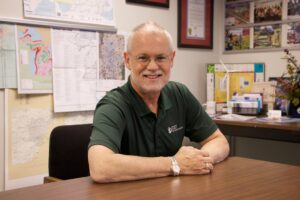 All told, Gratiot County government and schools received $8,311,627 in revenues from wind projects in 2020 and $57 million since the first project opened in 2012, county records show.

Michigan law prohibits spending property taxes from wind turbines directly on school operations, but these taxes can be used to pay off voter-approved bond issues and so-called sinking funds.

Wind revenues can help preserve a county’s agricultural base, said Sarah Mills, a researcher at the University of Michigan who has consulted with multiple local governments in the state about wind projects.

“For farmers, land is about productivity. For folks who have farms with wind turbines, the turbines are part of the productivity,” Mills said.

Mills said her research has shown that farmers with wind turbine leases invest more in their properties and are more likely to have succession plans for their farms.

“I think in terms of economic need, what farmers told me was that they re-invested the money in their properties,” she said. “They said they were more likely to have a succession plan for their farms. So, there’s a chance the younger generation will stay around to farm.”

In neighboring Shiawassee County, Bonnie Ott has only to look a mile and half to Gratiot County and see the economic benefits of wind energy.

There, she said, “The property owners there are putting on new roofs, adding new windows, buying new trucks. You have to look at this as an economic opportunity. In Shiawassee County, we’re having budget cuts, can’t surface our roads and losing out at our schools.”

Ott, a longtime teacher and member of the Shiawassee County Planning Commission, hoped to get wind projects approved in her county. But opposition stirred up by a trio of anti-wind activists led by Kevon Martis shot down wind projects.

Jim Wheeler, the current president of Greater Gratiot Development Inc., said county residents would like to have more wind projects but there isn’t much land available for them.

Now the county is looking to develop solar energy, he said.