Each year, wind farms throughout Michigan pay tens of millions of dollars in taxes that support the local school systems in rural communities that often have declining populations and tax bases.

Just how that money reaches school districts depends on the state’s complicated school finance system and whether communities have approved bond issues eligible for wind revenues. That system can make it hard to know where the money goes and what difference it makes.

A Checks & Balances Project review of county and state records show that those extra revenues have boosted school finances in the counties that have chosen to host wind farms.

For decades, Michigan schools were financed by local property taxes. Some districts, particularly those in rich suburbs or communities with large factories or shopping areas, received far more money per student than those with lower tax bases.

That changed in August 1993, when Michigan legislators repealed property taxes as the main way to pay for K-12 education. That was followed by Proposal A, a 1994 statewide referendum, that shifted school support from local property taxes to the state. Now, property taxes collected in local communities are sent to the state government in Lansing and redistributed to schools – along with other state funds – to provide what is called the “foundation allowance.”

State legislators passed, and Gov. Gretchen Whitmer signed, a law in July that raises the foundation allowance for each school to $8,700 a year.

As in many states, Michigan school districts offer bond issues to borrow money to support major projects. Michigan law allows districts with wind turbines to use tax revenues paid by wind farm owners to subsidize the cost of those bond issues.

In counties such as Huron, at the tip of Michigan’s “Thumb,” that funding path has cut the cost of the bonds in half. 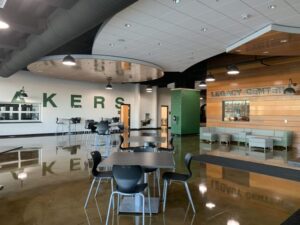 For the Elkton-Pigeon-Bay Port-Laker School District in Huron County, the “taxable value of the district has more than doubled in the past 10 years, due in large part to the taxes assessed on wind turbines,” according to a school district release.

In May 2018, voters in the district approved a $19.1 million bond issue and a supplement to a district account that would be financed in large part by wind taxes. That enabled the district to build a new athletic facility, innovation center and school auditorium.

Michigan also allows the use of a “sinking fund” to pay for school construction and other expenses.

The Michigan Association of Superintendents and Administrators describes a sinking fund this way:

“A sinking fund is a savings account into which a local school district can deposit voter approved local millage revenue in order to pay cash for projects or repairs as they arise rather than having to borrow through short-term notes or long-term bonds. Sinking funds provide districts with a cost-effective alternative to borrowing or bonding for some expenditures because they require none of the associated interest costs nor legal fees.  Using a sinking fund, the school district accesses the money on-hand to pay for projects as they are completed. Since the school district has not borrowed money for the projects, no debt is incurred and it does not pay interest on the money used.”

School districts must receive permission from the state treasurer to offer ballot issues for sinking funds, and then voters must approve them.

In Gratiot County, records show that the Ithaca School District has received $1.4 million for its sinking fund since 2012. The Ithaca High School just opened a new athletic field paid for with money from the sinking fund and bond issues.

These districts have multiple funding sources, foremost among them five different types of local property taxes. In areas with wind farms, that can provide a huge boost.

The Gratiot-Isabella Regional Education Service District covers multiple districts in Gratiot and Isabella counties. Voters there approved a 1.0 mill bond issue in 2013 that has generated $13 million for programs and facilities from wind revenues.

“When the economy tanked a few years back, because of the revenues from wind we were able to sustain spending on our programs for education while others didn’t. They remained steady,” said Don Schurr, the former president of Greater Gratiot Development Inc.

However, the success of districts able to tap these local property taxes has led to the same kind of funding disparities that affected local schools in the days before Proposition A.

Michigan taxes wind turbines as industrial personal property, and the taxable value of each turbine drops over time until it is taxed on 30 percent of its value.

But the tax formula set in 2007, which started off the development of the state’s first wind projects, has been changed by the state’s tax commission in 2011, 2014 and this year.

That has forced some counties to hold some of their tax revenues in accounts from which they withdraw the money in case the funding formula changes. It has also made planning for the future difficult for some governments.

A June tax commission ruling concerning a dispute over wind farms in Huron County ruled in favor of the utilities who appealed their bills after the tax commission changed the funding formula. More than 1,000 tax disputes remain to be decided, but the latest ruling is considered a precedent.

Following the June ruling by the tax commission, legislators from some counties with wind projects, such as Rep. Pat Outman, have started to write bills to keep tax collections at a higher rate. University of Michigan researchers are also studying possible alternative taxing methods for wind energy.

A revenue source that didn’t exist 12 years ago

Many of the communities that now benefit from taxes from wind turbines had, until the wind farms were built, few options to stem drops in populations and work forces that cut local tax revenues. 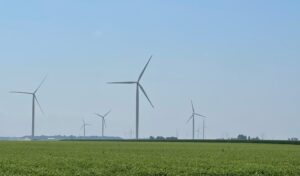 A wind farm in Huron County.

Schurr, the former head of Greater Gratiot Development Inc., said even with the limits on how wind revenues can be spent on schools, his county has received a tremendous benefit since the local wind projects came online in 2012.

Jeff Smith, Huron County’s zoning coordinator, said the county and its townships are making more money from wind than they had without it.

Smith is echoed by the findings of a Berkeley Laboratories report on wind revenues and schools released earlier this year. It found that “wind energy installation substantially increased district revenues, causing large increases in capital outlays, but only modest increases in current spending, and little to no change in class sizes or teacher salaries.”