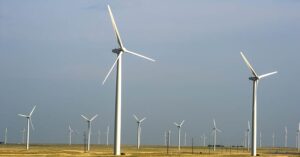 A trio of anti-wind activists have crisscrossed rural Michigan over the last dozen years, casting doubt on proven science, making unfounded allegations of government corruption and refusing to disclose the source of their financial support.

Records show that the arrival of Kevon Martis, Michael Homier and Joshua Nolan has been followed by restrictive zoning ordinances being drafted in at least nine townships in Michigan, often combined with recall elections against officials who supported wind farm development. C&BP has previously reported on Martis’s tactics in neighboring Ohio (see below).

During some of these campaigns, this trio of anti-wind activists and their allies have called officials who signed easements for wind turbines “corrupt” and undermined their local support.

While the trio’s sources of money remain unconfirmed, they receive political and moral support from a confederation of rich donors and affiliated nonprofit groups that discount the existence of climate change, promote the unfettered use of fossil fuels and cite studies that rely on questionable science.

Martis leads a nonprofit group, the Interstate Informed Citizens Coalition, which is the clearinghouse for most of his claims about renewable energy.

Baseless accusations of corruption and unethical behavior against local officials

Martis and Nolan have accused local officials of corruption and unethical behavior. According to ZipRecruiter, the average Michigan township supervisor makes $34,555 annually, averaging $16.61 an hour.

In Montcalm County, the trio of operatives is leading a fight against a wind farm development. Opponents there claim wind turbines are only 35% efficient, meaning they will have to be backed by fossil fuel plants and therefore cause more pollution. Research from the University of Michigan, however, shows that most wind turbines are 50% efficient, meaning they convert half of the wind passing through the turbines into energy.

Martis and his allies also claim the studies show property values decrease in places where wind farms are located. However, the one study they frequently cite from the London School of Economics in 2013 has been overridden by studies conducted elsewhere.

They also assert that neighbors living near wind farms will suffer from chronic sleep deprivation. However, a recent study in the medical journal SLEEP showed that most people who live near wind turbines do not suffer from sleep loss. “Overall the physiologic effects were modest, with the majority of measured outcomes not affected by wind turbine noise,” the report said.

And a 2019 study by the federal Berkeley Lab shows high rates of satisfaction by residents who live near wind projects – especially among those who live within a half a mile of a wind farm. This four-year project was aimed at providing guidance to communities studying wind projects in their areas. Of the 1,700 respondents, only 8% reported negative or very negative reactions to wind projects, while 57% were positive or very positive.

One presentation on the IICC website makes the claim that there is no proof that wind has reduced carbon pollution. However, that is contradicted by reports in China and the European Union that show that wind does reduce carbon pollution levels.

The three operatives are part of a group of individuals and organizations that claim climate change is a hoax and attack different forms of renewable energy.

The Heartland Institute, a vocal denier of climate change, cites Martis glowingly in its anti-wind energy articles. Heartland is part of a network of right-wing groups opposing efforts to rein in climate change.

Another ally is the is the Alliance for Wise Energy Decisions led by John Droz, another longtime denier of climate change. Droz also supports former President Donald Trump’s false claims that he won the most votes in the 2020 election.

In 2012, C&BP showed Droz at the heart of anti-wind propaganda sponsored by the fossil fuel industry.

C&BP reported extensively on Martis’ travels in Ohio to attack wind projects during the last decade. We detailed:

The three operatives are in the vanguard of a group opposing solar farms in Michigan and elsewhere. The Interstate Informed Citizens Coalition website contains a variety of posts about proposed ordinances to limit the development of solar farms in Michigan, often using misleading claims about their impact on agricultural production.