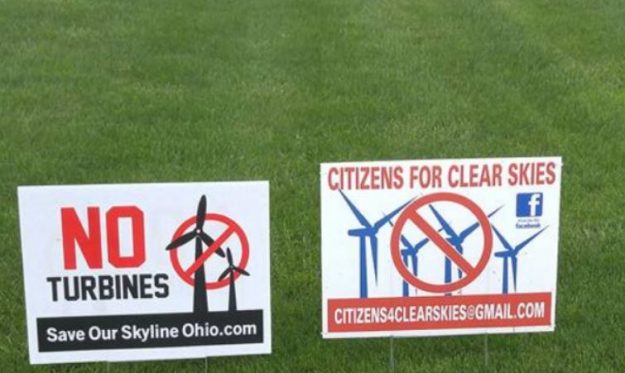 (Second in a Series)

For more than a year, Check and Balances Project (C&BP) has been investigating the forces blocking the growth of wind energy in Ohio.

Meanwhile, to the north, Paulding County’s surging wind farm tax revenue is projected soon to be $5 million a year. The economic benefits were recognized by General Motors that now powers all of its Ohio and Indiana manufacturing plants with wind energy generated in Paulding County and an Illinois wind farm, as well as by international agency Moody’s Investor Services when it boosted Paulding County’s bond rating.

Why, then, did Van Wert County’s citizens become so vocally anti-wind?

A new investigation by Checks and Balances Project has uncovered how social media was used in Van Wert County to instigate and encourage anti-wind frenzy by a vocal group of citizens. 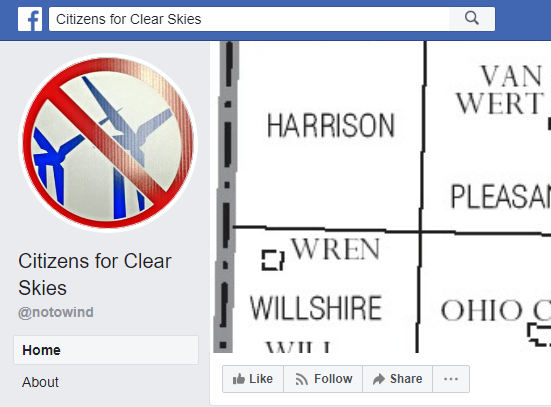 There is an echo chamber of anti-wind groups in Ohio that are tied together by Save Our Skyline Ohio, a repository of anonymous blog posts and disinformation, owned by self-proclaimed “concerned citizens from Ohio.”

Less anonymous are some of Save Our Skyline Ohio’s friends.

Save Our Skyline has links to Alliance for Wise Energy Decisions, a site with content copyrighted by the infamous anti-wind activist John Droz. Seven years ago, C&BP caught Droz trying to coordinate supposedly independent, local NIMBY (“Not in My Back Yard”), anti-wind energy groups in a national disinformation campaign.

More recently, Droz worked with North Carolina state legislators on a law that prevented the state from defining rates of sea-level rise. WRAL News in North Carolina reports that Droz does not hold a Ph.D., and “has yet to publish a single peer-reviewed article in any credible journal.” Droz is also a “Principal” at Master Resource, a “free market” front group, where he publishes frequently along with others who spent their careers in the oil and utility industries.

Flying Beneath the Radar

C&BP asked northwest Ohio economic development officials if any of them had heard of Save Our Skyline Ohio. None said they had.

But flying beneath the radar of the officials, Save Our Skyline Ohio has helped to organize opposition to wind development online and among local citizenry. Here, in a post from August 2016, we see a Save Our Skyline lawn sign next to a Citizens for Clear Skies lawn sign in Van Wert County: 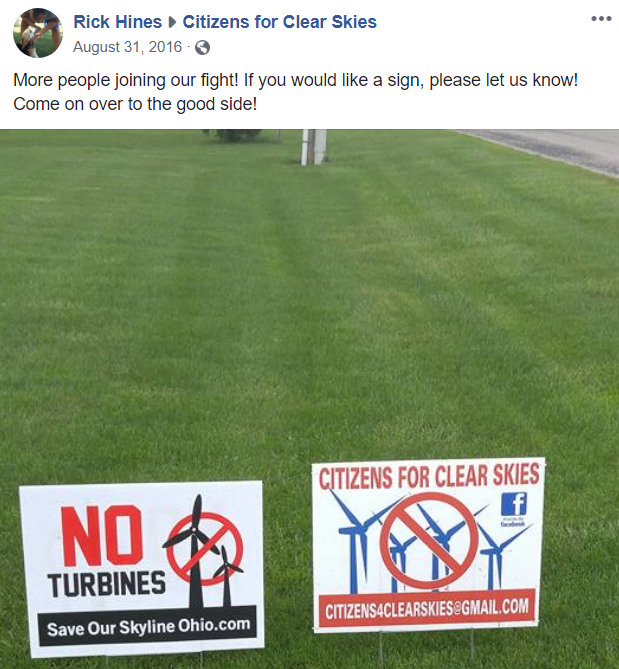 Save Our Skyline lists 13 counties with “Ohio Responsible Energy Groups.” But only the links to the groups in four counties – Hardin, Logan, Huron and Seneca – actually work.

Although the “About” section of Citizens for Clear Skies Facebook page of describes itself only as “A forum for citizens of Van Wert county to share concerns related to renewable energy, and it’s [sic] effects on our community,” the page was “initiated” by Jeremy Kitson, a Van Wert school teacher.

(Ironically, the Van Wert City Schools Board of Education in a statement in support of wind development, wrote “VWCS could see up to $672,000 annually in wind revenue…Added revenue means a reduced chance of increasing local school taxes.”)

Claims that Climate Data Is Manipulated

In a post from February 2017, Citizens for Clear Skies states its preference for nuclear and natural gas while dismissing climate science data as “manipulated.” 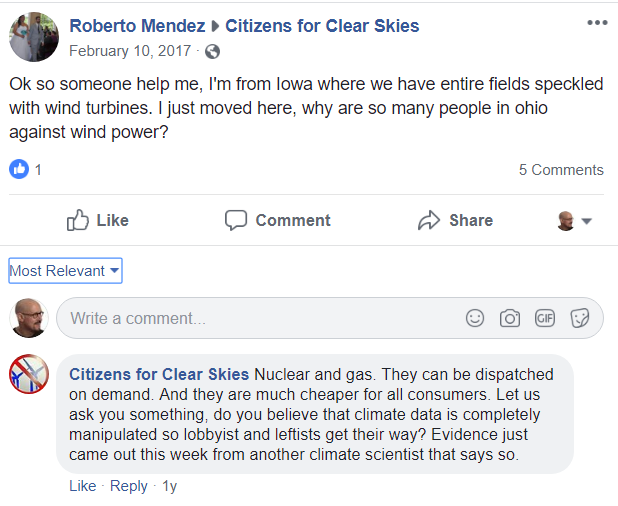 In this post from December 12, 2016, Citizens for Clear Skies argues for Ohio HB 554, which if signed into law would have ended a freeze on renewable energy standards and made them voluntary. Governor Kasich vetoed the bill.

A key influencer in this ongoing anti-climate science, anti-renewables, pro-fossil fuel messaging is Kevon Martis. During his presentation in Attica, Ohio, on May 31, 2018, Martis described himself as the former vice-chair of a small Michigan township’s planning council and the director of the Interstate Informed Citizens Coalition, Inc., which is also based in Michigan. Although he mentions his role as senior policy fellow for E&E Legal, he makes a quick joke and downplays it.

“Both of my positions are volunteer. I am not paid by the fossil fuel industry to fight wind. Which would be really perverse as most wind is built by fossil fuel companies.”

In fact, fossil fuel companies DO NOT develop wind farms in the United States, as we see in a recent list of the top ten wind developers. Martis’ false claim is repeated by others.

“I am not a paid lobbyist and I donate my time. Sometimes I get an honorarium, something like that. But I can’t receive any pay from any donations that come to the IICC. We can just offset our expenses.”

Notice that Martis doesn’t include D.C.-based E&E Legal when he says, “Sometimes I get an honorarium, something like that. But I can’t receive any pay from donations that come to the IICC. We can just offset our expenses.”

We attempted to contact Martis by email about the funding of IICC and E&E Legal and his other misstatements. We also left a voice mail at E&E Legal. He has yet to respond.

“Mr. Martis spends a lot of time doing this and is one of the finest speakers on wind turbine projects. This stuff is all great information and is all backed up.” 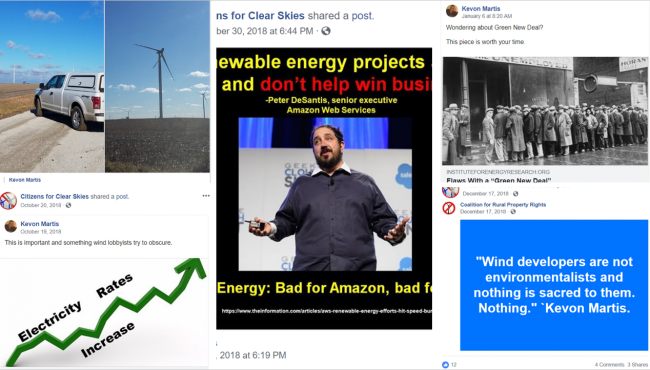 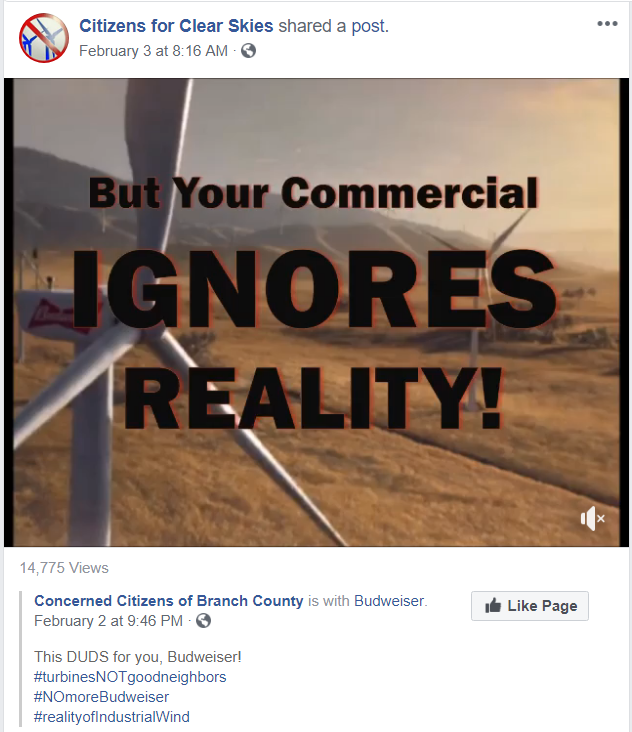 Will the taxpayers of Ohio listen to a well-organized band of anti-science, fossil fuel advocates flying beneath the radar of most citizens while promoting disinformation on social media? Or will they embrace the benefits of wind energy production obvious to economic development officials, elected leaders, corporations and international bond rating agencies? The side-by-side stories of Paulding and Van Wert counties deliver compelling guidance for Ohioans and us all.