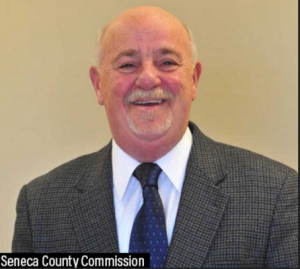 Our original inquiry into powerful Ohio House Majority Leader Bill Seitz, as readers might recall, was an effort to get to the bottom of who was blocking the growth of clean energy in Ohio.

Unfortunately, Ohio has had a history of dirty energy interests hampering the growth of job-creating, clean energy sectors. This includes the disastrous two-year “freeze” on wind development imposed by Gov. Kasich – a rule favored by the Koch brothers.

We’ve begun to follow the reach of anti-clean-energy actors down to the county level in Ohio. We have seen similar efforts in other states.

In a recent article in the Advertiser-Tribune of Tiffin, Ohio, a Seneca anti-wind leader lauded Mr. Kerschner for making a “motion to rescind the county’s Alternative Energy Zone.”

We recently filed a public records request to learn more about the decision-making of Seneca County Commission President Mike Kerschner. On Monday, our Ohio First Amendment Attorney Jack Greiner asked Mr. Kerschner when we would get a response to a basic records request we had sent him on July 16, 2018. We were told records should be coming next week. You can read our request HERE.

Additionally, we have opened a line of inquiry concerning one of Rep. Seitz’s colleagues in the Ohio House – state Rep. Bill Reineke (R-OH 88), whose district represents parts of Seneca County. You can read that request HERE.

Rep. Reineke, it should be noted, serves as Assistant Majority Whip in the Ohio House, and is a member of the leadership along with Rep. Bill Seitz. He recently announced support for the more strict 2014 setback requirements for turbines.

Both cases could be simply two elected officials responding to constituents. We’ll keep readers informed about what we find out.