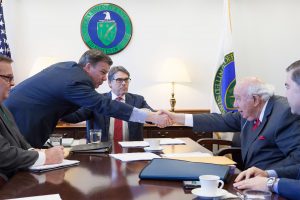 Photos Published by In These Times Show Secret Meeting with Energy Sec. Perry, Though Robert Murray Claimed “No Involvement” in Coal Bailout

Clean energy opponents have, for nearly a decade, talked about the need for solar and wind to abandon the limited policy support they receive, even though taxpayers overwhelmingly favor renewable-friendly policies.

The refrain from these critics in government, fossil fuel industries and their front groups is that “subsidies” are a sign of an industry that can’t hack it in the “free market” and are too unstable to survive without a government check.

But those same critics have been remarkably silent now that coal baron Robert Murray was caught not only seeking a government handout for his ailing company, but also lying about it.

In a remarkable series of photos uncovered by investigative reporter Kate Aronoff of In These Times, the Murray Energy CEO and founder is shown at a previously secret March 29, 2017, meeting with U.S. Dept. of Energy Secretary Rick Perry. In Murray’s hands is an “Action Plan” that, as Aronoff reports, proposes to alter the policies of the Federal Energy Regulatory Commission (FERC) to give handouts to Murray’s coal plants.

Six months later, on Sept. 28, the DOE proposed a “Grid Resiliency Pricing Rule” that would mandate utilities to pay coal and nuclear power companies — even if their power plants cost ratepayers more than other forms of energy and may not actually be in operation. According to a POLITICO analysis of DOE data, this “Pricing Rule” would be a significant windfall to Murray Energy, the nation’s fifth largest coal company. The company is headquartered in Ohio, with major operations in the Rust Belt and Appalachia.

On the same day that the DOE Pricing Rule was released, Sept. 28, on the sidelines of a U.S. EPA public hearing in Charleston, WV, Murray, was asked by E&E News about his role in the formulation of the rule, and said:

“I didn’t have any involvement. This was done by the Trump administration. … I had nothing to do with it.”

This on-the-record statement has now been proven blatantly false, with direct photo evidence to the contrary.

In the photo below, taken on March 29, Energy Sec. Perry listens to Murray Energy CEO Robert Murray. At far right is former Murray Energy lobbyist Andrew Wheeler, who was nominated on Oct. 5 to become Scott Pruitt’s deputy administrator at the EPA.

In the next photo, we see the cover page of Murray Energy Corp.’s plan, presented to Energy Sec. Perry and others at the March 29 meeting.

FERC is scheduled to announce its decision on the Pricing Rule on Jan. 11, 2018. It has received 1,500 comments, including opposition from groups as diverse as the American Petroleum Institute and the American Wind Energy Association.

Readers have told us that the state of Ohio is now considering a similar coal welfare bill. The issue is worth looking into.