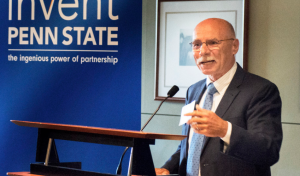 A Cover-Up of Play-to-Play Academic Research?

We received an anonymous tip from a concerned member of Penn State community that raises a new question about how the relationship between Vice President Neil Sharkey, College of Health and Human Services Dean Ann C. “Nan” Crouter and School of Hospitality Management (SHM) Professor John W. O’Neill may be hindering a probe into O’Neill’s possible ethics violations.

“FYI. Neil Sharkey used to work for Dean Crouter for many years and was chair of the search committee that cleared the way for John O’Neill to be anointed.”

Since last fall, we’ve been examining how Professor O’Neill has been using his position at the University to bolster his hotel industry consulting practice in what appears to be a clear violation of PSU ethics policies. Recent revelations of documents from the American Hotel & Lodging Association’s (AHLA) 2014 board of directors meeting reveal that O’Neill was retained to write a study, which has a predetermined conclusion, that the lobby later used to its benefit in the media  ̶  commonly known as pay-to-play research.

A week prior to receiving this new tip on April 14, PSU Vice President of Research Neil Sharkey, informed us via email on April 6, 2017, that Professor O’Neill had been found in compliance with all Penn State ethics policies. He wrote:

“For your information, our internal inquiry by our Office for Research Protections has been completed. Dr. O’Neill is currently in compliance with University policy, and we consider the matter closed. As we do with all compliance issues, we will continue to monitor and will look into them as they may arise.”

Although Vice President Sharkey mentioned in a letter, which we received from him on February 28, that he chaired the search committee elevating O’Neill to SHM director, he neglected to mention his relationship with Health and Human Development Dean Ann C. Crouter. Crouter personally enabled O’Neill’s ascension according SHM whistleblowers.

Are Sharkey and Crouter protecting a colleague they promoted and over whom they may have failed to exercise proper oversight?

To find out, we asked Penn State’s Chief Ethics Officer Regis Becker to take a fresh look at the ethics investigation. Yet despite sending a letter to Mr. Becker on April 27 that details O’Neill’s failure to disclose significant conflicts of interest resulting from his production, propagation and promotion of two major AHLA-funded studies, we have yet to receive a response or even an acknowledgement from him.

In fact, we previously sent letters of inquiry to Dean Crouter, O’Neill’s supervisor, and V.P. Sharkey. Not only have Crouter and Sharkey failed to provide substantive responses to any of our questions about O’Neill’s tenure as SHM director, but the University has also failed to answer basic questions about his possible ethics violations.

Got a Confidential Tip?

Thank you to all the members of the Penn State community who are providing us with important information; a great university like Penn State should live up to its high standard of academic ethics.

If you have a tip related to this investigation, please email it to [email protected].

We protect all sources.

Anonymous Tip from Penn State: “There is a bigger story here.”