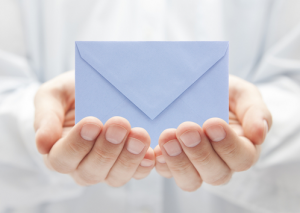 In late December, we received an anonymous tip in the mail from a reader about our ongoing inquiry into possible ethics violations by Penn State Professor John W. O’Neill of the School of Hospitality Management (SHM).

Our inquiry has so far revealed strong evidence that Professor O’Neill may be operating a private consulting practice on campus, using the University’s prestige to increase the credibility of his corporate-funded research, which has produced findings highly favorable to the hotel lobby. Due to our complaint, O’Neill is now the subject of an ethics inquiry by the University.

Although we have decided not to reproduce an image of the envelope the anonymous tip arrived in to protect our source, we are posting the message in full so you can read it yourself:

The letter provides several useful leads that inform reporting on the private/public nexus between the hotel lobby and Penn State’s School of Hospitality Management, as well as possible ethics violations by  O’Neill.

As the tip is anonymous, we took some time to independently confirm some of the most incendiary leads, including, “She [Dean of Health and Human Services Ann C. Crouter] anointed John [O’Neill] as Director, rather than through a vote which is against policy.”

SHM’s history page and news releases, in fact, support the tipster’s claim by:

In contrast, the announcement of O’Neill’s appointment in 2011 does not mention a search committee. Instead, it quotes Dean Crouter as praising O’Neill’s “strong ties to the industry,” and highlights his consulting work for “dozens of companies, including the Darien Hospitality Group, Hilton Hotels, Marriott International, American Express, Citizens Bank, GMAC Commercial Mortgage, Kaplan Publishing, Prentice Hall, as well as a number of law firms.”

Do You Have an Anonymous Tip?

Checks and Balances has received many useful anonymous tips in the past that have informed our reporting, including concerning the Arizona Corporation Commission and the Coast Guard’s offshore wind energy study, among others.

We thank the courageous reader who sent us this tip and encourage s/he, and anyone else, to send  information to:

We also have established a special email address at [email protected] and can communicate with you over a variety of encrypted platforms.

We protect all sources.

Scott Peterson is executive director of Checks and Balances Project, a national watchdog blog that seeks greater accountability for government officials, corporate managers, academics and others who block progress on building a more sustainable economy. Funding for C&BP comes from sustainable economy philanthropies and donors.