Since October of last year, we’ve been reporting on the potential ethics violations of Professor John W. O’Neill of Penn State’s School of Hospitality Management (SHM). He appears to be operating a private consulting practice on campus, using the University’s prestige to increase the credibility of his corporate-funded research, which produced findings highly favorable to the hotel lobby.

Professor O’Neill was also instrumental in creating SHM’s Industry Advisory Board, which comprises many of his largest hospitality clients, including Marriott International, Hyatt Hotels and Resorts, and Shaner Hotel Group.

A Web of Contradictions

Unfortunately, the ethics referral process is a difficult labyrinth to follow. Each potential violation has a different process for reporting, referral and adjudication. Depending on the ethics policy, these differences can be slight or major.

“A faculty member must request and obtain prior written approval from his/her department head or unit head prior to engaging in private consulting.”

So in late November, we sent a letter to Professor O’Neill’s department head, Dr. Ann C. (“Nan”) Crouter, Dean of the College of Health and Human Development, to ask if he asked for and/or received approval to use University resources to operate a private consulting practice. Although we provided Dean Crouter with evidence of the campus-run consulting practice, she’s remained silent, despite our repeated attempts by us to obtain a response.

The process of reporting potential violations of policies governing Significant Financial Interests and Conflict of Interest is also perplexing. Per the University’s website:

To that end, the University has a comprehensive COI [Conflict of Interest] Program, within the Office for Research Protections, to review and manage all potential financial conflicts of interest in a manner that is consistent throughout the University.”

The policy also states Conflict of Interest (COI) staff can be alerted to potential violations by outside parties. So, we tried calling and emailing COI Director Clint Schmidt to no avail. We then attempted to submit in person an ethics referral regarding about Professor O’Neill’s possible ethics violations. But, as you can see in the video above, Mr. Schmidt refused to see us and had his office manager give us post-it note with a toll-free number to the ethics hotline instead. 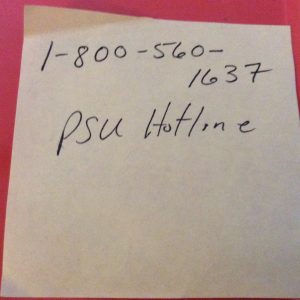 Not only is the ethics referral and oversight process puzzling, but the policies covering Professor O’Neill’s possible ethics violations are rife with exemptions.

Checks and Balances Project reached out to University officials more than a dozen times to gain a better understanding of this process. We’ve never gotten a response, except when we visited in person. The good news: Penn State has confirmed to the Centre Daily Times that the complaint against Professor O’Neill is now before the Office of Ethics and Compliance. So the PSU community can at least expect a thorough, fair and transparent investigation.