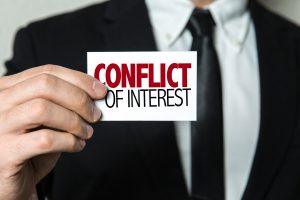 Since October 2016, we have been reporting on how Penn State School of Hospitality Management (SHM) Professor John O’Neill is using his position at the University not only to bolster his consulting practice, but also to increase the credibility of the hotel lobby pay-to-play research he conducts on behalf of his client, the American Hotel & Lodging Association (AHLA).

Despite a brief email informing us that Professor O’Neill has been found in compliance with Penn State policies regarding operating a private consulting firm on campus and managing conflicts of interest, we recently sent a letter to Regis W. Becker, Penn State’s Chief Ethics and Compliance Officer, providing him with this new evidence and asking him to reopen the previous investigation or begin a new inquiry.

Both the New York Times and Checks and Balances Project reported on documents uncovered separately from AHLA’s 2014 and 2016 board of directors’ meetings that show O’Neill was directed by the hotel lobby to produce research that aligns with and bolsters AHLA’s strategic goals.

Our reporting also shows O’Neill failed to disclose significant conflicts of interest to the public and, apparently, to Penn State that resulted from his longstanding commercial relationship with the hotel lobby. This evidence strongly suggests that he might have not only flouted widely accepted research norms, but also violated specific provisions of PSU’s research ethics policy.

The two reports in question are “Extreme Wage Initiatives & The Hotel Industry: Impact on Local Communities and the Nation” in 2014 and “From Air Mattresses to Unregulated Business:  An Analysis of the Other Side of Airbnb” in 2016.

O’ Neill’s academic credibility allowed AHLA President/CEO Katherine Lugar to declare in numerous media outlets, including NBC News, Yahoo Finance and CNBC, that the research conducted by a seemingly impartial Penn State professor bolstered her organization’s arguments against increasing the minimum wage. Yet documents uncovered by the New York Times show he had been “engaged” by AHLA.

In 2016, Professor O’Neill’s anti-home sharing report for AHLA garnered media coverage in Bloomberg and The Guardian, among others. In each case, O’Neill was again positioned as simply an impartial researcher.

“To avoid the possibility of any misunderstandings concerning the appropriate conduct of faculty and staff members in regard to all transactions touching upon their University duties and the property of the University.”

In describing what behavior constitutes a conflict of interest, the Penn State’s ethics policy is very clear. This includes:

Considering Mr. Becker’s firm stance that “the university will not tolerate wrongful conduct,” we ask that he conduct a vigorous, transparent investigation that will answer important questions about O’Neill’s hotel lobby-funded reports including:

We’ll be sure to update our readers and the Penn State community with any new developments.

You can read the letter in its entirety here.

Anonymous Tip from Penn State: “There is a bigger story here.”