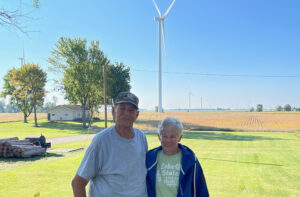 The success of wind projects in adjacent Gratiot County encouraged elected officials in Isabella County to support the development of a wind project that is projected to earn local governments at least $30 million in taxes. Isabella is a heavily agricultural county that hosts Central Michigan University.

Now, with the Isabella Wind I and II wind farms online, Isabella County is generating 383 megawatts of electricity, enough to power 121,450 homes and supply major customers such as Ford, General Motors and the University of Michigan.

It took years of struggle to reach this point, however, as wind opponents fought the attempts to approve and then build the Isabella wind farms for four years.

Gratiot County got its first wind farm in 2012. Since then, the six wind farms in the county have generated more than $57 million in taxes for local governments and schools. Schools in districts throughout the county have improved their facilities, while a reliable stream of renewable energy has stoked the local economy.

“I’ve got three words: ‘Wind is free’,” said George Green, the former chairman of the Isabella County Commission, who has two wind turbines on his property.

Townships will get new taxes from wind projects

The six townships in Isabella County that host the projects’ turbines have some of the greatest financial needs.

Financial records detailed by cleargov.com show that in 2019 (before the 2020 launch of the Isabella I and II projects) the townships – Denver, Gilmore, Isabella, Nottawa, Vernon and Wise – all received the bulk of their revenues from state and federal governments, not from their own tax stream. In essence, taxpayers in other townships and counties were propping up their finances.

Meanwhile, the financial pictures for the townships in Gratiot County with wind projects are reversed, according to statistics provided by cleargov.com. These townships have empowered their communities to pay their own way with wind revenues.

Financial reports from Isabella County show how the addition of wind turbines has bolstered the county’s tax base.

In the fiscal year ending on Sept. 30, 2019, the turbines were the second-largest item on the county’s tax rolls, adding $31,995,032 in value. That was before the turbines even went into operation.

A year later, county financial records show, the turbines were the largest item on the tax rolls at $69,830,200 in assessed value.

The county seems so enamored of its new wind turbines that it features a photo of a landscape dominated by wind turbines on its website.

About 600 Isabella County landowners signed leases with Apex Clean Energy as it sought approval for the wind project.

Opponents were backed by out-of-town activists Kevon Martis and attorney Joshua Nolan. They launched a furious counterattack, which led to a complicated series of referenda in the County and townships in 2017 and 2018.

Wind supporters won the referenda elections and the County commission locked down the issue in 2019, allowing construction to proceed. That didn’t placate Nolan, who threatened the Commission with lawsuits.

During the height of the struggles to approve the wind project, opposition drove a wedge in the community. “It was bad enough around here that for a while family members wouldn’t talk to family members,” said John Pedjac, a Denver Township supervisor who supported wind projects after some initial skepticism.

“A lot of it to me is more emotion-driven on the anti [wind] side, and fact-based on the pro [wind] side,” Pedjac said.

Carol Green is the treasurer of Nottawa Township, where she and her husband, former county commissioner George Green, own a farm that has two wind turbines on the property. She said some of the opponents were won over by a trip to a Gratiot County wind farm, which she called the smartest decision by the project’s developers.

Two wind opponents were on the trip, she said. As they stood under a spinning turbine, one of the women said to the other, “’I can hear you fine. You can stand here and talk underneath.’ So, that changed her mind, and I told the people from Apex that the best thing was when they took the people down there and showed us right underneath the turbines.”

LouAnn Mogg is an outspoken wind energy opponent in the County. She and her husband own land they lease her land for dairy farming and wind opponent, is still not persuaded. In 2018, she led an unsuccessful effort to have Pedjac recalled.

“People make such a big deal about how important wind is, but it only makes up 3.9 percent of all of the energy we use,” Mogg said. “Nobody would notice if went away.”

According to the U.S. Department of Energy, wind makes up 8.4 percent of power generated in the United States, and the percentage is rising steadily.

Isabella County is planning a new county jail that will be paid for in large part by taxes on wind turbines. The current jail was built in the 1950s.

George Green said the state department of corrections insisted that Isabella County upgrade its jail, and there was no way the County could avoid or afford it. Using wind taxes lightened the financial load of paying for the new jail.

Students in the Mount Pleasant school district, which includes some of the townships were the wind projects are located, will benefit from a series of facility improvements that will be paid for by a $45 million bond issue voters approved last month. Revenues from wind projects are used to pay off school bond debt.

In Nottawa Township, Carol Green said the extra money is already coming in.

“The townships where the schools are, are very happy,” she said. “The township is happy. Of course, this year was only 50 percent” of project revenues, “but we’re probably getting about $80,000. Our next year it’ll be at 100 percent.”