– Yet PADS Co-Founder Dr. Robert Campbell Was on the First Panel of Conference She “Absolutely” Helped to Organize

When we received a tip last October about a group called Physicians Against Drug Shortages (PADS) that allegedly was getting op-eds published in national and regional newspapers without revealing financial ties to certain medical companies, we decided to take a closer look. We did this because their tactics seemed to match those of other industry-funded pundits masquerading as unbiased experts in the media.

Our survey of the media that was publishing and broadcasting commentary from PADS members revealed that one of the most prolific communicators among this group’s members is a Pennsylvania pediatrician, Marion Mass, MD. Unlike other PADS co-chairs, Mass had no obvious financial conflicts. We reached out to her to learn more.

C&BP encountered Dr. Marion Mass in the doorway of the Members Room at the ornate Jefferson Building of the Library of Congress in Washington, D.C., on April 1, 2019.  It was shortly before the Free to Care Health Care Conference, that Mass had co-hosted, was about to begin. We started out by asking her about Physicians Against Drug Shortages, but she quickly demurred.

(Here’s the audio of our interview:)

Dr. Mass was right. Although we found her listed on the PADS website as a co-chair as far back as November 2017, by April 2019 her name had been removed.

In June 2017, a group Mass co-founded, Practicing Physicians of America (PPA), began collaborating with PADS. Mass co-authored at least two op-eds with PADS Co-Founder Robert Campbell, MD. They visited the White House together. PPA is still listed on the PADS website as a “coalition partner” and on the PPA site, Mass is currently described as serving “as leadership for Physicians Against Drug Shortages.”

When she organized the conference at the Library of Congress, Mass gave Campbell top billing.

But when we asked her about that directly, Dr. Mass hesitated: 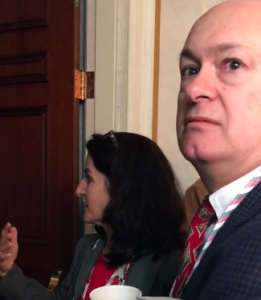 Dr. Campbell made a brief appearance, then walked away quickly before we were able to ask him any questions.

Late last year, another PADS co-chair, Stanford Professor of Anesthesia John G. Brock-Utne, M.D., PhD.  authored an article that appeared in three publications arguing that hospital drug and medical device shortages were due to many manufacturers having been shut out of the marketplace. Dr. Brock-Utne parroted the PADS argument that the culprit was group purchasing organizations and other middlemen that provide supplies to hospitals and other facilities. Other possible factors were ignored.

What Brock-Utne didn’t reveal is that he received payments of $48,245 over five years from certain drug makers and other suppliers, including Mylan Specialty L.P. and Grifols USA, according to the Centers for Medicare and Medicaid Services Open Payments database.

Having been rebuffed on our questions about Brock-Utne’s apparent financial conflicts, we tried a more direct line of questions.

And Then Dr. Mass Waved Good-Bye

Unfortunately, C&BP was blocked from entering the conference. We pointed out to a doorkeeper that the event was being held in a public building and offered to pay. But the answer was a firm no. We asked if we could have a copy of the program —a stack of them were on a nearby table. After hurried consultations amongst the event staff, we were, reluctantly, given one.

On the cover, in prominent position was the name of the conference funder. Why did Dr. Mass avoid mentioning the funder who received primary placement on the conference brochure — the Texas Public Policy Foundation?

Texas Public Policy Foundation is a conservative think tank based in Austin, Texas, that’s a member of the right-wing State Policy Network. One of its initiatives is Fueling Freedom, which seeks to “explain the forgotten moral case for fossil fuels.”

Curious about these connections, we reached out to Dr. Mass with some additional questions. We asked:

Mass responded in an email to say she paid her own expenses to attend the conference. The question of whether the Texas Public Policy Foundation paid her a fee to organize the conference was ignored. As for the question of “who funds PADS,” Dr. Mass would only say that we were “barking up the wrong tree.”

Drs. Mass, Campbell and Brock-Utne certainly have a right to their opinions. But why are they all working so hard to avoid answering basic questions of accountability and funding?

“I Had a Feeling They Were Using Us. It Left a Bad Taste in My Mouth. Others I Spoke to Felt the Same Way.”