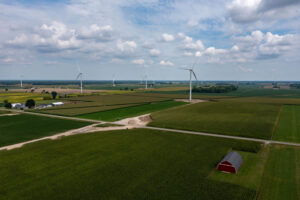 For years, opponents of wind energy have cited claims that the presence of turbines in an area causes property values to drop.

Checks and Balances Project (C&BP) has reported that these claims are false. Now a detailed report in the Greenville Daily News of Michigan has shown that property values in areas with wind turbines have actually risen sharply.

“Turbines do not appear to have a negative impact on property values in neighboring counties — particularly amid Michigan’s hot market of highly contested home sales and ever-increasing property values,” said the article by reporter Elisabeth Waldon.

Waldon’s investigation showed that in Gratiot County, where there are six wind farms operating or under construction, “all townships with turbines in Gratiot County saw sizable residential value increases in both assessed value (AV) and taxable value (TV).”

Her article echoed points made in earlier C&BP articles reporting on wind opponents’ claims about property values. Our March report showed that a home that a local realtor, Marcy Myers, claimed had lost value because of nearby wind turbines was actually across the street from a notoriously stink livestock lot licensed to release 5.4 million gallons of animal waste a year.

We asked the Michigan Township Association, which represents township officials, and the Michigan Chamber of Commerce for comment. So far, neither organization has responded.

Waldon attempted to get comment from multiple Realtor organizations around the state, but only Brad Ward, vice president of public policy and legal affairs for the Michigan Realtors Association, commented.

“Our statewide policy statement does not deal with wind turbines,” Ward told the Daily News. “We rely on our local associations to make those decisions and get engaged at the local level because it really does depend on the community and the folks involved there. But we don’t have a statewide policy on that.”

C&BP has shown that many of the claims made by wind opponents – such as that turbines make people sick or they produce a crippling form of infrasound – are false.

Ray Locker is the executive director for Checks and Balances Project, an investigative watchdog blog holding government officials, lobbyists, and corporate management accountable to the public. Funding for C&BP is provided by Renew American Prosperity and individual donors.