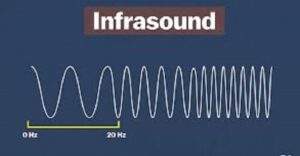 Opponents of wind energy falsely claim that a type of low-frequency sound called “infrasound” harms human health. Yet, no scientific consensus exists that it does so.

Misinformation about infrasound is so pervasive that it routinely appears in debates, official correspondence and ordinances in rural Michigan townships related to wind projects.

Ordinances in several Michigan townships list infrasound as one of the “adverse secondary effects” of wind energy.

“I have a heart condition, and I’ve read some disturbing articles about how air pressure and infrasound can affect those with heart conditions,” Montcalm County resident Roxanne Niner wrote Sidney Township officials in January 2021.

However, multiple acoustical science and medical studies show that infrasound does not harm human health.

“Since its discovery,” New York University anthropology professor Sophia Roosth wrote in a 2018 paper, infrasound “has been associated with hidden, often sinister or malevolent forces, those which are all the more unsettling because exposure is unnoticed, even insensible.” The New York University professor’s research was presented in “Nineteen Hertz and Below: An Infrasonic History of the Twentieth Century.” 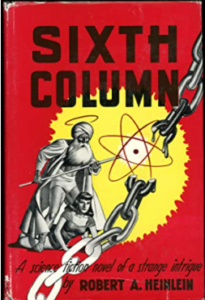 Infrasound appeared as a mysterious weapon in this 1941 science fiction novel.

Infrasound first emerged as a source of fear in science fiction author Robert Heinlein’s 1941 novel, “The Day After Tomorrow” or “Sixth Column.”

“There’s nothing like the fear of something you can’t understand to break a man down,” one of the book’s characters said.

Vladimir Gavreau, a Russian-born French researcher, first started promoting theories about the weaponization of sound in the 1950s. These claims have persisted over the next 65 years, as wind energy opponents have tried to blame health problems on infrasound from wind turbines.

Gavreau, however, built much of his research on extremely high levels of noise, not the barely perceptible sound emitted by wind turbines.

Two Gavreau papers, wrote acoustic scientist Geoff Leventhall, “were seized upon by the press and presented to claim that infrasound was dangerous.”

Two Portuguese researchers – Nuno A.A. Castelo-Branco and Mariana Alves-Pereira – have led a crusade to show that infrasound causes “vibroacoustic disease,” a claim that has been roundly criticized as based on little concrete evidence.

Much of the concern about infrasound, Roosth wrote, comes from the mind, not the wind. It is a “diagnostic of modern paranoias about the imperceptible risks to which we imagine ourselves exposed,” she wrote.

Pediatrician Nina Pierpont, a longtime opponent of wind energy, has made some of the most egregious claims about the negative consequences of infrasound.

In a 2011 report by the provincial government of Ontario’s Environmental Review Tribunal,  Leventhall called Pierpont’s work “weak and unfounded, she has a rather poor understanding of acoustics, her work has not been peer-reviewed, and she misuses other people’s findings in reaching her conclusions.”

In that same report, Dr. Gloria Rachamin, a toxicologist with the Ontario Ministry of Health and Long Term Care, said that Pierpont published her work on Pierpont’s own website and in a privately published book. It was not “subjected to a rigorous scientific review and published in a scientific journal,” Rachamin said.

Dr. William David Colby, the medical director for Chatham-Kent, Ontario, said in the 2011 report that Pierpont’s work “constitutes the worst examples of selection bias he has ever seen in any published work and he does not believe that it makes any worthwhile contributions to the literature on wind turbines and health.”

A 2019 column in the Oregonian by three public health experts called Pierpont’s claims a “discredited hypothesis.”

One of the leading supporters of Pierpont’s discredited work is the Australia-based Waubra Foundation, which was founded by a longtime fossil fuel executive and whose leadership consists of wind opponents, climate change deniers, and nonpracticing physicians.

The Australian government stripped Waubra of its non-profit status in 2014 for making repeated false claims about illnesses related to wind turbines.

“It is not possible for me to find that the Foundation’s principal activity promotes the prevention or control of disease in human beings,” said David Locke, an Australian charity regulator, in February 2014.

“My current view is there is that there is insufficient evidence that ‘wind turbine syndrome’ or ‘vibroacoustic disease’ caused by proximity to wind turbines are recognized as human diseases or that the health problems that have been perceived by the complainants as being associated with living or working close to wind turbines are a disease,” Locke said.

The alleged threat of turbine-caused infrasound has been consistently raised during local meetings throughout rural Michigan over the last two years.

In an October meeting, Montcalm Township Planning Commissioner Robert Hemmes waved around an alleged peer-reviewed study of infrasound. The township clerk did not respond to a request for a copy of the study Hemmes mentioned during the meeting.

An attendee at a September meeting of the Cato Township Planning Commission asked about the effects of infrasound on residents with autism.

A Eureka Township resident asked that commissioners there created a zoning ordinance for wind that included protection against infrasound.