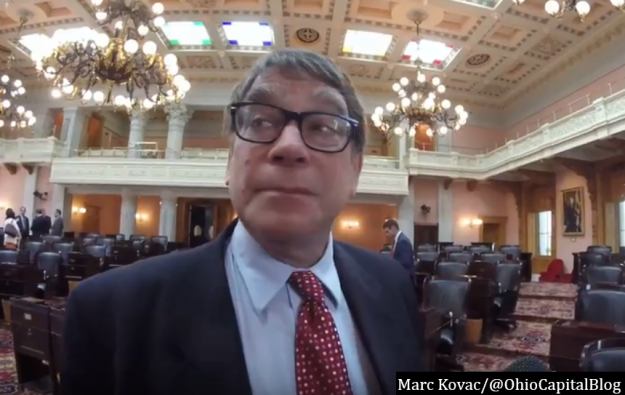 For months now, we’ve been examining why self-proclaimed “free market” Bill Seitz, the powerful Majority Leader in Ohio’s House of Representatives, picks energy winners and losers in the state’s economy. Despite proclamations that he dedicates his “time and resources to promote limited government, free markets and federalism,” in reality, our investigation has demonstrated him strategizing with fossil fuel lobbyists representing major users and producers of natural gas and blocking wind industry jobs in Ohio.

Is this a free market approach? Or one directed by fossil fuel lobbyists and corporate leaders?

An important answer to that question may be Seitz’s six years as a member of the board of directors at the American Legislative Exchange Council (ALEC).

ALEC creates template legislation that advance the interests of major corporate lobbyists that bankroll the organization. Then, it promotes that legislation to some 2,000 elected state legislators so they can spread these lobbyist-written bills in their respective states. Most of these state policy makers work part time, and don’t have large staffs to develop legislation. As a result, they rely on influential lobbyists, many of whom are from polluting industries, to write legislation.

As far back as 2004, ALEC prepared a telling, energy and environment guidebook for legislators that downplayed the global climate disruption crisis:

“Carbon dioxide, the inescapable by-product of burning fossil fuels, is beneficial to plant and human life alike. The effort to regulate it as a greenhouse gas is an attempt to tax energy…Losing fuel diversity can only be harmful to our economy and ultimately the environment itself.”

Not much has changed since then.

At the ALEC Annual Meeting held in Denver in July 2017, on the first full day after his arrival, Seitz’ calendar shows that he met with the ALEC finance board and attended a lunch with donors.

Year after year, as corporations such as American Electric Power, Wells Fargo, News Corporation, Shell, Union Pacific, AT&T, Dow Chemical, Honeywell and Verizon have made the decision to abandon ALEC — Seitz has stayed put. In the year prior to the Denver meeting, Expedia, AARP and Ford Motor Company resigned their ALEC memberships.

Although companies cited other reasons, ALEC’s positions on climate change was a frequent reason for resignation. A Shell spokesman said:

“[ALEC’s] stance on climate change is clearly inconsistent with our own.”

“[T]he facts of climate change are not in question anymore. Everyone understands climate change is occurring. And the people who oppose it are really hurting our children and our grandchildren and making the world a much worse place. And so we should not be aligned with such people. They’re just literally lying.”

Legislators are reported to pay very little for their memberships. Did the defections of all of these major American corporations — 71 since Seitz had joined the board in 2013 — concern the Ohio representative and others on the finance board?

Where could the money be found to replace the lost membership fees? Was there someone at the donors lunch they could reach out to?

Even if Charles Koch or representatives of the Charles Koch Foundation and Charles Koch Institute were not at the donors lunch, they wouldn’t have been hard to find. The Koch organizations increased their contributions to ALEC by nearly $200,000 bringing their donations up to $779,068 in 2017 alone.

An investigation by Checks and Balances Project revealed accelerated attacks on clean energy by the Koch Network over 17 years. From 1997-2013, $192 million was donated to 72 groups associated with opposition to clean energy solutions and climate change denial.

Seitz Given Award by ALEC

A year later, in June 2018, Seitz received ALEC’s “Legislator of the Week” award. In his profile, Seitz was asked, “[if you] could ‘wave your magic wand,’ what would you like to see immediately implemented in Ohio?” His response was telling:

“We are in need of a comprehensive energy policy focused on insuring the reliability and resiliency of our electric grid, the need to avoid over-reliance on intermittent electric generators.”

In Seitz-speak, “intermittent electric generators” are code-words for wind and solar. In Ohio, Seitz has been the key legislator blocking the growth of job-creating renewable energy and energy efficiency. Although he once supported Ohio’s renewable energy standards, by 2014 he had changed his position, referring to them as “Stalinist government mandating.”

Is it a coincidence that he had joined the ALEC board the prior year?

We asked Rep. Seitz for his communications regarding energy policy with ALEC leadership and board members. Seitz claimed he had none.

That assertion stretches credulity as much as the Ohio Disciplinary Counsel’s letter that we received over the holidays declaring that there was no real conflict regarding Taft Law — Seitz’s former employer — being hired to investigate sexual harassment allegations made against him. That includes Taft Law’s PAC giving Seitz a political contribution while the firm was investigating him.