Jeanne Radsick of Bakersfield-based Scott Tobias Real Estate is a director of both the National Association of Realtors (NAR) and its California affiliate. On Sept. 9, 2017, she appeared before the Taft (CA) City Council as part of a push by the realtor lobby to kill homeowner access to the popular financing program known as Property Assessed Clean Energy (PACE).

During her statements to the City Council, where she failed to mention her national and statewide roles, Ms. Radsick made a series of questionable statements. In total, we counted nine misstatements, ranging from inaccurate information about average interest rates for this type of financing to misrepresentations about the new consumer protections bills regulating the state’s PACE sector. Ms. Radsick also misrepresented Governor Brown’s position on PACE legislation passed by the California legislature which he subsequently signed into law.

The suits are part of our effort to get to the bottom of questions about how powerful lobbyists got local officials to kill PACE in both jurisdictions. This popular program for homeowners offers up-front financing for energy efficiency, water conservation, renewable energy and seismic improvements that are paid back through property tax assessments.

Jeanne Radsick was a part of the lobbying team that reached out to Kern County Board of Supervisors Chairman Zack Scrivner to request a meeting to discuss PACE. In this email, obtained by C&BP through a public records request, Ms. Radsick is referred to as a “local realtor.” Once again, her role as a director of the national association and the California Association of Realtors (CAR) is not mentioned. 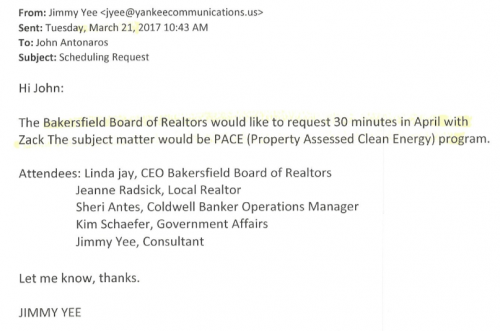 As we reported on July 11, 2017, C&BP received a reader tip in May alleging the California association has subjected Bakersfield and Kern County, California, among other localities, to an intense anti-PACE campaign. It appears that Jeanne Radsick is a leader in that campaign.

On October 26, 2017, we sent a letter to Ms. Radsick — said to be considering a run for president of CAR — to ask if she would explain some of the curious statements in her presentation to the Taft City Council.  Our questions are:

You can read the entire letter here.

So far, we have not heard from Jeanne Radsick. We will update this post when we do.

Why Did California Realtors Do an About Face on PACE?