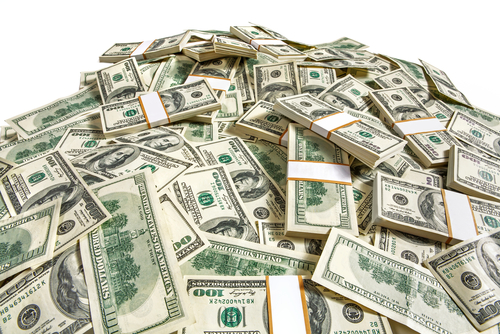 The new, widely-popular, and more sustainable method of hospitality offered by home sharing is under attack by the hotel lobby. As we continue to examine the hotel lobby’s campaign, one giant of the industry keeps turning up. It’s the largest hotel chain in the world: Marriott International.

Frequently, Marriott doesn’t own hotels. Instead, it licenses the use of its brand names. Hotel owners pay royalty, licensing and franchise fees to Marriott-controlled offshore subsidiaries, allowing Marriott to avoid taxes on the earnings. An example is its use of Global Hospitality Licensing S.à.r.l., based in Luxembourg – reportedly run by a single employee.

As reported by Bloomberg’s Jesse Drucker:

“These transactions help Marriott attribute profits from those brands to the offshore subsidiary instead of to the U.S. parent company, where they would be taxed at the 35 percent federal income-tax rate.”

This scheme has supercharged the growth of its overseas cash pile, which by the end of 2015 had reached $1.1 billion. Marriott refers to the money in its 2015 SEC Form 10-K as “indefinitely reinvested.” 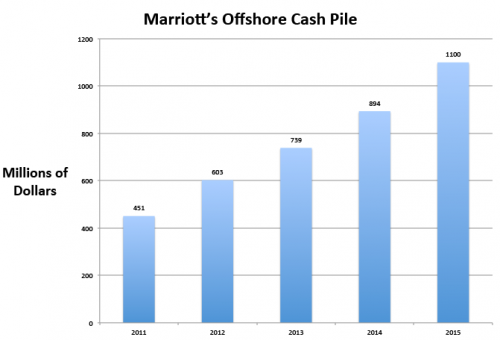 “No U.S. income taxes have been provided on filing basis undistributed foreign earnings and profits of $3.6 billion as of December 31, 2015. We consider these earnings to be indefinitely reinvested….”

We won’t know if Marriott has combined its $1.1 billion with Starwood’s $3.6 billion to create a huge $4.7 billion pile of money sheltered offshore from U.S. taxation until Marriott files its 10K Annual Report with the U.S Securities and Exchange Commission early in 2017.

Marriott’s method of sheltering untaxed income overseas is in addition to its success, as we reported previously, at getting local U.S. officials to hand over more than $1.6 billion in corporate welfare to underwrite its hotels. 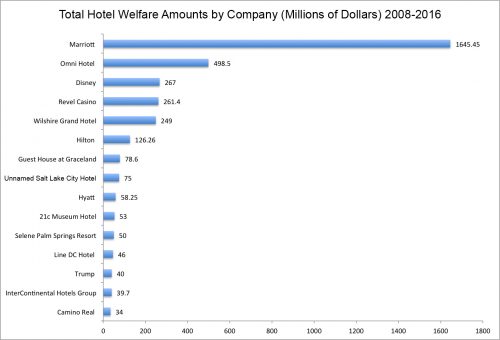 Thanks, But No Thanks

Marriott has demonstrated its prowess at using the tax code and compliant government officials to build its bottom line. But its response to the U.S. government’s special offer to bring its untaxed foreign cash home a decade ago raises questions.

The American Jobs Creation Act of 2004 offered Marriott and other companies a special one-time tax holiday to encourage them to bring offshore cash holdings home. But Marriot declined the offer:

“We reviewed the effects of the repatriation provision in accordance with recently issued Treasury Department guidance, and decided not to repatriate any foreign earnings under the Jobs Act.”

Will Marriott International ever bring its $1.1 billion back to the United States, where it is based, to be taxed and provide funds to help rebuild America? And what happened to Starwood’s $3.6 billion sheltered offshore? We hope to find out.