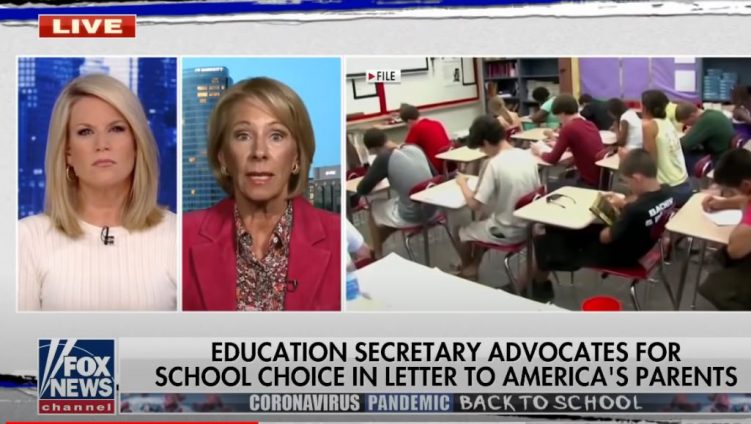 Checks and Balances Project has filed a complaint against U.S. Education Secretary Betsy DeVos, alleging violations of the federal Hatch Act, which prohibits a federal official from using their authority to affect the result of an election. The complaint has been sent to the U.S. Office of Special Counsel, which is charged with investigating potential Hatch Act violations.

Sec. DeVos’s series of violations began Sept. 1, 2020, when she attacked presidential candidate – and former Vice President – Joe Biden on Fox News, saying his pledge to reverse DeVos’s widely unpopular policies as “shameful.” In addition, Sec. DeVos’s statement that “he’s turned his face in favor of the teachers union” is a clear political attack. It has no relationship to her duties as a federal cabinet secretary. The Presidential election is less than two months away.

The 1937 Hatch Act is clear: Officials of the U.S. government must not use their authority or influence for the purpose of interfering with or affecting the result of an election. Nor may they engage in political activity while on duty.

Secretary DeVos has come under criticism and legal rebuke for abusing her power in office. During DeVos’s rocky confirmation hearings in 2017, the billionairess pledged, “If I am confirmed, I will not be involved in any political contributions, and my husband will not be either.” Yet, her money has funded the groups that aggressively protested public health quarantines by coming armed with assault rifles into Michigan’s Capitol building in Lansing.

In October of 2019, Secretary DeVos was held in contempt of court for “violating an order to stop collecting on the student loans owed by students of a defunct for-profit college.”

C&BP is probing potential tax avoidance manuevers by DeVos and her husband by flagging their domestically operating watercraft in the Cayman Islands, a common tax dodge by wealthy yacht owners.