U.S. Secretary of Education and billionaire Betsy DeVos is pushing hard for public schools to reopen in person this fall, dismissing widespread parent and teacher concerns about coronavirus health risks. Yet, even in Sec. DeVos’s home state of Michigan, there’s only one full-time equivalent school nurse for an estimated 6,570 students. 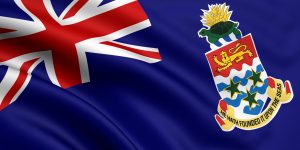 recently reported that instead of being registered in the DeVos family’s home state of Michigan, its $40M “Seaquest” yacht is registered instead in the Cayman Islands through RDV International Marine, an affiliate of the company that controls the DeVos family‘s $5.4 billion fortune.

By registering their 164-foot pleasure craft in the Caymans, the DeVos’s appear to save an estimated $2.4M in state use taxes annually. Beside the Seaquest, the secretive family also appears to own nine other yachts, as well as 12 jets and two helicopters. 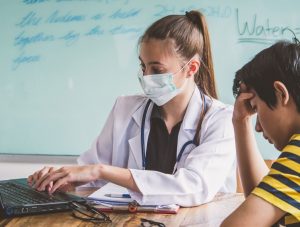 How Many School Nurses Could $2.4M Provide in Michigan?

Checks and Balances Project estimates that this single act of alleged tax avoidance for the Seaquest yacht denies the state an amount that is equivalent to the salaries of 40 school nurses, enough to cover the needs of over a quarter million Michigan school children at  estimated nurse-to-student ratios. The state is facing a $2.2B budget deficit because of the pandemic-induced recession. Nurses are considered crucial to safely re-open schools.

The State of Michigan tried in the past to force yacht owners to pay annual usage taxes. Whether the DeVos’s alleged $2.4M tax avoidance for the Seaquest is legal or not, it appears to be squarely in the middle of an ethical red zone. It seems pretty tough to justify a billionaire secretary of education hurting school kids through her family’s alleged tax avoidance.

We suspect that in addition to state taxes, offshore flagging their yacht saves the DeVoses higher labor costs for its crew members, including social security and workers compensation insurance.

$2.4M Buys A Lot of Other Supplies

In the middle of a once-in-a-century pandemic, there are a lot of supplies that the unpaid $2.4 million could purchase: 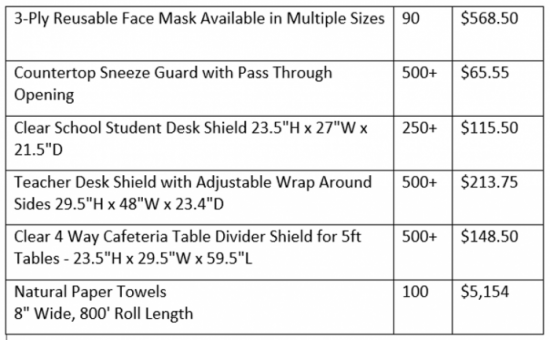 Sec. DeVos has not offered any plan that distills the latest medical science into clear, actionable steps for schools. That has left local education officials to guess at how to safely re-open schools. She also has been criticized for steering taxpayer money from struggling public schools to wealthy private schools. Yet, Education Secretary Betsy DeVos recently told the Washington Examiner that she has spent her time during the pandemic taking walks, bike rides and completing puzzles. 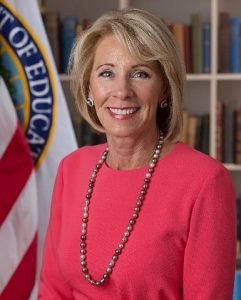 “I like the challenge [of puzzles] …. Yeah, it’s a fun thing to see all those pieces together and actually have something finished and completed.” She said the completed images are mostly photographs, vistas of the Italian shoreline or geographical collages. “Things that are interesting to me.”

School nurses in public schools, well, apparently not so much.