Kochs Grow Stronger: Why It Matters 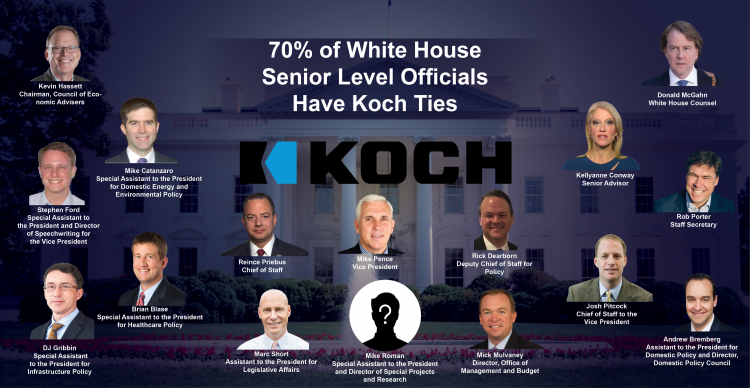 (For a printable version of this graphic, click HERE.)

While people are focused on President Trump, day-by-day, with little notice, the Koch Brothers are getting stronger. And their deep ties to Vice President Mike Pence are paying off.

David Koch has demonstrated his appreciation of Pence by giving him more money than to any other candidate. Today, Pence is one step away from becoming President of the United States. When he recommends individuals for major jobs in the Trump Administration, as he did consistently as the leader of the transition, and to this day in his role as Vice President, Pence guides implementation of the Koch agenda.

C&BP has assembled from a variety of sources and our own original research a list of 16 high-ranking officials in the White House with ties to the Kochs. They include:

To learn more about the 23 White House senior officials, click HERE or on the image at the top.