Moore’s cousin, then-County Commission Chairman Jason Falls, had played a key role in Moore’s hiring. Falls explained that the county, in addition to contracting Moore as County Attorney, had also hired a staff attorney for the first time. The staff attorney would take “the lion’s share of the work.” The “new position will save the county money,” Falls added, “because Moore won’t work as many hours as [his predecessor] did.”

“It’s an honor to get to be the county attorney, but it’s not a full-time job.”

Records obtained by Checks and Balances Project, however, show that the part-time job has turned out to be a fruitful one for Moore. In a county where the annual per capita income is $20,677, Moore’s part-time job brought in $275,172.50 over three years or an average of $91,724 a year.

Moore Gets More from Cleveland County

The taxpayers of Cleveland County appear to pay County Attorney Tim Moore a greater amount than the taxpayers of North Carolina as a whole pay him as House Speaker and State Representative. According to figures provided by the State Comptroller in 2015, state taxpayers paid Moore $83,873, including $37,305 in base salary. This includes $104 a day for 276 days in subsistence pay, plus about $12,000 in expense reimbursements and $6,000 for travel. 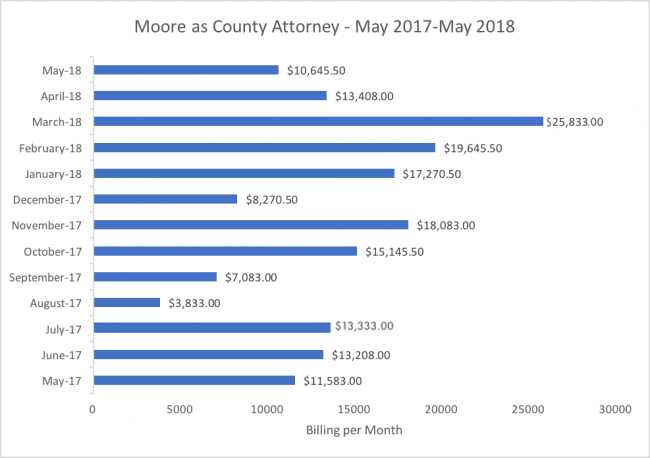 March 2018 was an especially good month for Moore. Here is his invoice for that month, which includes a curious entry at the end for “Review of Sheriff’s Office and DC matters with staff.”

Moore’s ability to leverage substantial income from a part-time job with a poor, rural county raises questions – particularly for a politician whose political party professes a small-government view in which people should make their money off the private sector instead of the government.

Only one other North Carolina state lawmaker is known to have served simultaneously as a county attorney, according to a report in the Charlotte Observer. That was Senator Fletcher Hartsell, who was county attorney in Cabarrus County. Hartsell resigned and was sentenced to prison on unrelated charges in 2017.

Scott Peterson is executive director of Checks and Balances Project, an investigative watchdog that seeks to hold government officials, lobbyists and corporate management accountable to the public. Funding for C&BP comes from sustainable economy philanthropies and donors.