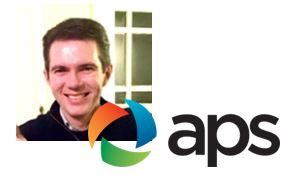 Nearly 11 months ago, a reader tipped us that Arizona Corporation Commissioner Bob Stump used text messaging as his preferred means of communication. We found and reviewed footage of him texting repeatedly during Commission meetings. That led us to ask to examine Mr. Stump’s text messages, in which he might have conducted public business and illegal electioneering with APS lobbyists, candidates who are now fellow commissioners, and political operatives.

We received a 240-page text message log from Verizon. Upon investigation, we learned that Stump had texted with APS lobbyist Barbara Lockwood 56 times – most in a concentrated period just before the August 14, 2014, GOP primary election when the utility’s favored candidates won.

But none of Barbara Lockwood’s text messages were provided by Attorney General Mark Brnovich’s office to retired Judge and Special Master David Cole to review.

Our investigation also showed that Stump exchanged hundreds of texts with leaders of two dark money electoral groups, an attorney tied to APS, two pro-utility ACC candidates – Tom Forese and Doug Little – who went on to win their primary and general elections, and their campaign manager. The timing and recipients of Stump’s text messages appears to support the allegations made by whistleblower Antonio Gill in a letter to Brnovich that Stump knew of dark money schemes to elect pro-utility candidates to office.

Yet none of these text messages were given to Special Master Cole to review either.

The defendants in our lawsuit – Commissioner Stump, the Arizona Corporation Commission, and Attorney General Brnovich – know this, but have filed a Motion to Dismiss.

The text messages in the chart below and more are included in a list that we provided to Maricopa County Superior Court Judge Randall Warner that he passed along to Special Master Cole. But they have not been examined.

Commissioner Stump also exchanged 273 text messages with his Executive Assistant Beth Soliere. But these texts were also not given to Special Master Cole.

Stump exchanged 605 text messages with his Policy Advisor Amanda Ho (now working for APS) but none of them were given to Cole.

Stump exchanged 1,786 text messages with Lon Huber, a consultant to the state’s ratepayer advocate RUCO, but none were provided by the AG’s investigators to be examined by Special Master Cole.

We know all of this because Cole himself said to the Arizona Republic’s Ryan Randazzo, the text messages he examined “either weren’t a match” to the more than 3,500 on our list “or they were with a person that was not one of the targets.”

If Cole saw these messages, what are the odds that none of the more than 3,500 text messages that Commissioner Stump exchanged with these people were public business?

Two months ago, Assistant Attorney General Karen Hartman-Telez promised to send our attorney, Dan Barr, details on the technical procedures used to examine Commissioner Stump’s iPhone. Yet a leading forensic expert we have retained, Mr. Bryan Neumeister, has questions about the thoroughness of the AG’s investigation of the iPhone as well as the adequacy of the technology. You can read the letter than we sent to the Assistant AG last Friday HERE.

In the letter, Barr proposes a reasonable solution that won’t cost the state one dime. We propose that Neumeister: 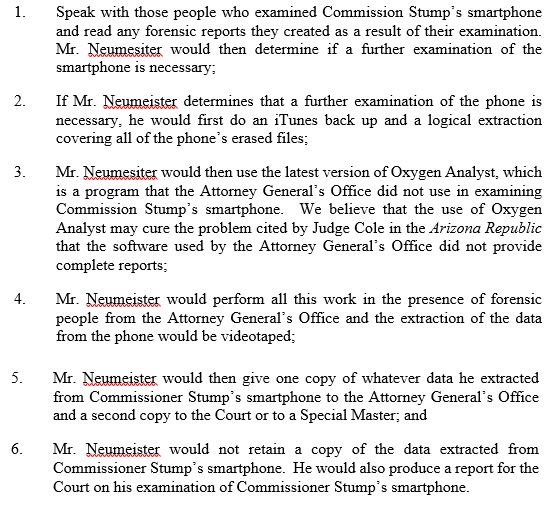 Today, we filed our own motion to modify Cole’s report and another opposing the defendant’s dismissal motion. You can read the filing HERE.

We have not received a reply to our reasonable proposal from the Assistant Attorney General, other than the Corporation Commission’s Motion to accept Cole’s report and dismiss our lawsuit.

Without answers to basic questions about why the AG provided more than 10,000 of Bob Stump’s text messages to Special Master Cole to review, but omitted more than 3,500 on our target list, and whether or not the latest forensic technologies were used to get the text messages to begin with, we’re left with the impression that the Attorney General is hiding the ball.