For the past decade, Checks and Balances Project (C&BP) has investigated lobbyists, corporate executives and government officials blocking the growth of a sustainable economy. We’ve exposed the fossil fuel lobby’s attacks on solar energy in Arizona and Nevada, and wind energy offshore New England. We’ve shined a bright light on secret meetings between the powerful California realtor lobby and government officials trying to kill a popular energy efficiency financing program. And, we’ve unmasked the Koch Brothers’ attacks on clean energy and their grooming of Vice President Pence.

Recently, we received a tip about tech billionaire Steve Ballmer, the former CEO of Microsoft. He is the 15th richest person in the world, worth $55B, and he wants to finance the building of a new sports arena in Inglewood, CA for his Los Angeles Clippers basketball team. There’s one real roadblock in the way of Steve Ballmer achieving his dream. To build the arena, he would need to crash through California’s tough carbon pollution reduction law.

We thought we’d take a look.

A little over a year ago, California’s outgoing Governor Jerry Brown signed AB 987 into law. Its intent was to enable Ballmer to start construction for his new arena in 2021. The Clippers currently share the Staples Center, in downtown Los Angeles, with the Los Angeles Lakers. Steve Ballmer wants his new facility to be game-ready when his lease expires at the Staples Center in 2024.

But despite numerous clean energy and energy efficiency standards that the new arena apparently can meet, there is one that’s a major problem for Ballmer. State law requires the new arena complex to reduce carbon pollution in neighboring communities.

Unlike the Staples Center, located near the Metro Blue Line’s Pico (Chick Hearn) Station, and near the conflux of several freeways, the site in Inglewood is a transit desert. Thousands of cars would be needed to transport fans to each Clippers game at the proposed arena.

The California Air Resources Board (CARB) has so far refused to approve Ballmer’s application, apparently deciding that Steve Ballmer’s arena would not reduce carbon pollution as the law requires.

Complicating matters further for Ballmer, on October 22, 2019, California Gov. Gavin Newsom sent him a letter that signaled he may be reluctant to intervene in the regulatory decision-making process.

A number of community and environmental groups, as well as some of California’s leaders, are opposed to the proposed Inglewood arena. Former U.S. Senator Barbara Boxer recently joined a protest against the site. In a letter to CARB Chair Mary D. Nichols, Boxer wrote:

“The project also falls far short of AB 987’s high standards for greenhouse gas (GHG) mitigation, relying on unrealistic assumptions and baseless claims. It would set an alarming environmental precedent, opening the floodgates for other baseless claims of GHG reductions from future projects.”

Ballmer is also encountering strong opposition from Madison Square Garden Company (MSG), owned by billionaire James Dolan. Dolan also owns the Inglewood Forum and claims it would be hurt by Ballmer’s proposed arena. The Forum was refurbished several years ago as a concert and event venue.

Dolan and MSG allege that Inglewood Mayor James Butts misled MSG to give up a Forum overflow parking lot to build a technology center. Instead, the land is being turned over to Steve Ballmer for his new stadium.

Earlier this year, the Los Angeles County District Attorney’s office determined that Inglewood officials likely committed a Brown Act violation by failing to include in a city council meeting agenda details about the land deal. Also missing was that Inglewood had entered into an “exclusive negotiating agreement” with the Clippers about the land. A complaint was filed too late, however, for the D.A. to act. Nevertheless, MSG’s lawsuit is proceeding. 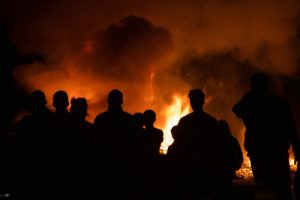 Whatever the outcome of that lawsuit, Ballmer’s biggest obstacle is likely to be California’s carbon reduction goals. The state, suffering through wildfires, drought and then torrential rain, is the leader in the United States taking tough action to address the climate crisis. Subverting the state’s standards would set a bad precedent.

Will Steve Ballmer’s billions overpower the will of the people of California so that he can build his basketball arena?

We hope to learn more about how the former Microsoft CEO and his associates are dealing with government officials. We’ll report back what we find out.