Why Are Two NYC Agencies So Reluctant to Release Public Records About an eProcurement Contract? 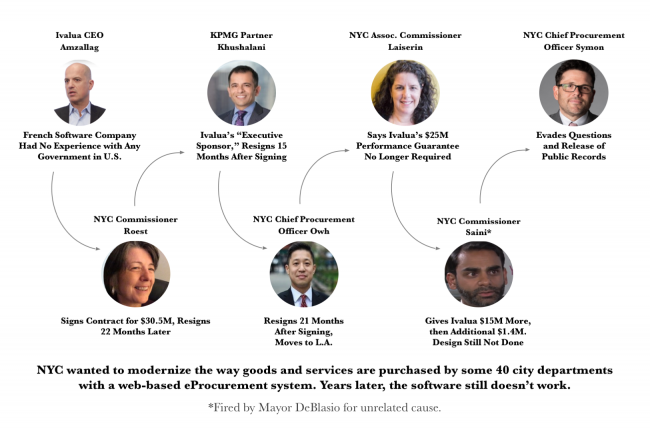 Former NYC Department of Information Technology and Telecommunications (DoITT) Commissioner Anne Roest signed a $30.5 million contract in May 2016 with Ivalua, a French software company that had never worked for any government in the U.S., and KPMG, a professional services and accounting firm not known for systems integration.

Was it because Ivalua-KPMG offered the lowest bid? Not according to our sources.

To get a contract of this size from New York City, a company typically needs to have a track record. How did this happen? And why are two City agencies so reluctant to disclose public records?

6.13.18 – The “design is not completed and requirements have not been validated,” declares new DoITT Commissioner Samir Sani. Accenture is declared the new subcontractor, Ivalua given another $15M to “contract maximum” of $46M

6.19.19 –Mayor’s Office declares it has no records despite 75 references in the Ivalua contract

Do you have information to share? Send us a note through our confidential tip line. Your tip can be completely anonymous.

Which NYC Official Failed to Collect Ivalua’s $25M Bond for Non-Performance — and Why?