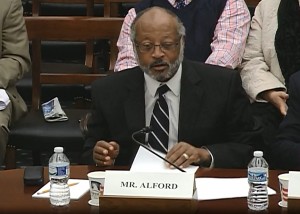 More than a year later, CEO Harry C. Alford still refuses to answer questions about his organization’s structure, tax status, among others.

Readers might remember the Washington Post’s September 2015 story, “In Smog Battle, Industry Gets Help From Unlikely Source: Black Business Group.” The piece raised important questions about Harry C. Alford and his organization, the National Black Chamber of Commerce (NBCC). In the story’s wake, Mr. Alford’s ability to peddle misinformation about climate change solutions has been hindered.

Now, a new investigative report by Bloomberg News shines a light on the myriad other stances that the NBCC has taken on behalf of its deep-pocketed, entrenched donors.

Our reporting focused on gross inconsistencies in Alford’s portrayal of his organization’s size and membership. The Post’s story focused on Alford’s use of the NBCC to spread misinformation about the health impacts of pollution and undermine support for clean energy technologies. However, Bloomberg’s reporting highlights the sheer volume of positions the NBCC has backed, which large companies benefit from the NBCC’s advocacy and whether those companies donated to the NBCC.

According to Zachary R. Mider, who wrote this exposé:

The common thread: Someone with deep pockets stood to gain from Alford’s words. Many of his efforts also coincided with campaigns run by DCI Group LLC, a Washington consulting firm that gets paid to generate just the sort of advocacy Alford provides. While the chamber doesn’t disclose all of its contributors, it has acknowledged taking money from many companies that benefit from its advocacy.

And Checks and Balances knows well how difficult it is to obtain answers to simple questions from Harry Alford:

Because of his continued refusal to share basic information about his organization, such as funders, staff or consultants, CBP began an investigation to answer these questions on our own. And our findings formed the basis for an IRS complaint alleging the NBCC abused its tax-exempt status in the following ways:

You can read the entire complaint here.

Last year the Checks and Balances Project, a pro-clean-energy watchdog group, complained to the IRS that the chamber’s ‘primary activity appears to have been direct and grassroots lobbying to advance the agenda of its various corporate sponsors.’ The IRS hasn’t acted publicly on the complaint.

As the his story states, we have not received any updates on our complaint. The IRS’s policy on providing updates to complainants says, “Federal law prohibits the IRS from providing you with status updates or information about specific actions taken in response to the information you submit.”

Although we do not know the status of the IRS’s investigation, stories such as Bloomberg’s indicate the extent of Mr. Alford’s influence, despite his unwillingness to answer basic questions about his claims of what his organization is, and who it represents.

In the wake of the Bloomberg story, it’s past time for Harry Alford to answer these questions.

Evlondo Cooper is a senior fellow with the Checks and Balances Project a national watchdog blog that seeks to hold government officials, lobbyists and corporate management accountable to the public. Funding for C&BP comes from pro-clean energy philanthropies and donors.