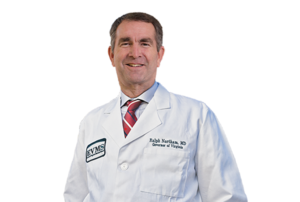 Last week, we asked Governor Northam’s press secretary, Alena Yarmosky, to help us understand the Governor’s position on the future of his alma mater, Eastern Virginia Medical School (EVMS). The signals to date have been confusing.

EVMS has been chronically underfunded for years. Sentara Healthcare, on the other hand, is a nonprofit hospital chain that has amassed a cash reserve of $6 billion. Virginia’s reserves, by contrast, are $1.1 billion. Sentara’s operations rely heavily on EVMS alumni, faculty, and residents.

Will Northam back the healthcare giant’s longshot play to walk away from EVMS and leave Virginians footing the bill?

What we know so far:

On December 12th, our request to interview Sentara Chair Diane Calderone is denied.

People deserve to know where Gov. Northam stands during a public health crisis that is hitting the Hampton Roads Black community particularly hard.

We will report back when we know more.