Memo: Getting the facts straight about western support for Wild Lands

Oil and gas industry-backed politicians in Washington this week are continuing their efforts to return to the industry land-grab days of the Bush administration by ignoring the facts during “oversight” and budget hearings. Instead of supporting common-sense reforms that will drive robust energy development in the West, while still protecting public lands and water for use by outdoor recreation enthusiasts, sportsmen and families, these politicians are attempting to score political points with misleading attacks.

“The public deserves better than what corporate-sponsored politicians in Washington are offering on the energy debate. Members of congress and industry lobbyists are working together to willfully ignore large groups of the Americans they are supposed to represent, including small business owners, sportsmen, and elected officials. These men and women have expressed support for Wild Lands because protecting these lands creates jobs, drives local tourism and outdoor recreation economies and preserves the heritage of the American West. Politicians and corporations need to stop crying that their free ride is over and start working to benefit everyday Americans.”

Quotes by westerners in support of the Wild Lands policy

“These wild lands form the very core of our businesses, as the places our clients seek out to enjoy the most natural qualities of the public lands.”

“Wild lands provide an important economic engine in the West and across the entire United States – visitors come from around the nation and world to visit our prized landscapes and tourism has remained a reliable economic driver for generations.”

Opponents to Wild Lands in Congress such as Doc Hastings, Rep. Rob Bishop, Rep. Doug Lamborn, and others continue to ignore the facts when attacking Secretary Salazar. According to the Bureau of Land Management, 1 acre of public lands is protected wilderness for every 42 acres that are leased to oil and gas corporations. What’s more, out of the nearly 30 million total acres leased for drilling, oil and gas corporations are allowing two-thirds, or about 20 million acres, to lie unused. Hastings and Simpson should be leaning on oil and gas corporations to use the resources they already have access to, rather than trying to deny lands to outdoor businesses that create jobs and are a cornerstone of the economies of towns and cities in the West. To ignore 20 million acres while crying that they need more land means this is simply a land grab on the part of fossil fuel corporations, rather than an actual necessity. 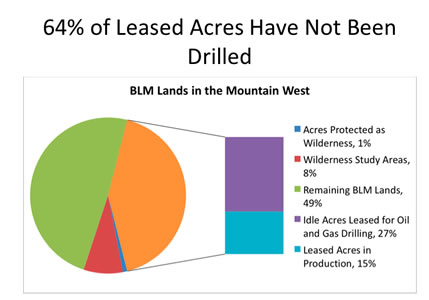