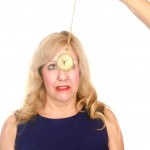 Influence peddling in America is a $9 billion a year industry. It’s as big as Major League Baseball or NASA’s Mars spacecraft program, changing from direct meetings with lawmakers to a vertically integrated set of businesses that work every stage of government decision making – including the shaping of public opinion.

Many have charted the size, scope, and growth of the influence peddling industry. There’s the definitive, 25-part Washington Post series on the emergence of modern mega-lobbying firms. Ross and Amter’s definitive history of the chemical lobby The Polluters. Merchants of Doubt, by Oreskes and Conway, that laid bare the growth of the lobbyist-funded think tank industry. There are also definitive books by then-reporter Jeff Birnbaum’s, including The Money Men: The Real Story of Fund-raising’s Influence on Political Power in America – though Birnbaum later joined the influence business himself.

The point is that as a growth industry, influence peddling needs to find new ways to grow to acc 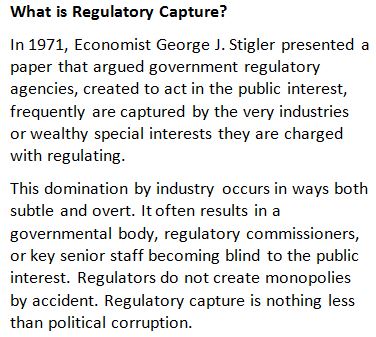 ommodate the ever-expanding ranks for former staff and public officials who want to make big money after their public “service.”

So it was only a matter of time before previously sleepy public offices, such state assembly offices, state public utility commissions, and writers of obscure cost-benefit analyses became part of the influence peddling playbook. That’s particularly true now that the big shifts in the energy industry are under way. Rooftop solar on people’s homes has been declared a “mortal threat” by the lobbying arm of the utility industry, which has launched a very concerted effort to penalize their customers for buying less of their product.

In many states, commissioners have been lured to ally themselves with the industries they are charged with regulating. There is a term for this, created by Nobel Prize winner Economist George J. Stigler over 50 years ago: “Regulatory capture.”

The financial crisis of 2007-2009 can be explained partly as a problem of regulatory capture. Regulators were so enamored by Wall Street’s risk prevention mechanisms and their way of life that they failed to recognize the enormous risks that were being taken right under their noses until it was too late.

In Virginia, the State Corporation Commission (SCC) is charged with regulating Dominion Resources, a monopoly utility and the Commonwealth’s most powerful corporation. Yet last October, two senior staff members of the SCC wrote a comment letter to the U.S. Environmental Protection Agency about the federal Clean Power Plan (CPP). The CPP is intended to reduce carbon pollution. Although it gives states wide latitude in cutting the pollution and independent studies show it will save money and create clean energy jobs, the staffers attacked the CPP as “arbitrary, capricious, unsupported, and unlawful.” They are thought to have taken Dominion’s 2013 Resource Plan as the basis for their frontal assault.

Utilities nationwide have captured Public Utility Commissions, in whole or in part, just like Dominion has enveloped its own in Virginia. This effort is seems to be encouraged by the Edison Electric Institute (EEI), the utility industry trade group based in Washington, DC.

In January, 2013, EEI released a man-the-battle-stations white paper that said solar panels on residential or commercial roofs that are not utility-owned or utility-purchased would lead to a death spiral for the utility industry. Since then, the effort to smother the solar baby in its cradle has been stepped up.

With renewable portfolio standards, net metering and the CPP, the next two years will decide how many clean energy jobs and energy efficiency savings Americans will see. The stakes are high.

The Checks and Balances Project has noticed that in a number of states, utility commissioners are acting almost as consultants to the utilities they are charged with overseeing. The range of favoritism is wide – from casual remarks to open assistance to help a regulated utility shop for a favorable state judge. There seems to be an emerging trend, which is why we are launching a systemic look to see what’s going on in state public utility and state corporation commissions. Where the influence is going, so should the oversight accountability.

We’re launching our Captured Regulators initiative by asking questions about these officials:

Are there public utility commissioners, public service commissioners or state corporation commissioners in your state that you think are captured by the utility industry? Or commissioners you have questions about like Audrey Zibelman of New York or Virginia’s Mark C. Christie?

If so, tell us more. Send us an email to [email protected].