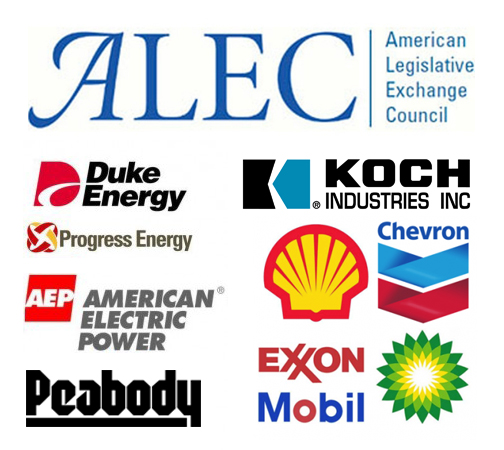 Members of the American Legislative Exchange Council (ALEC), including fossil fuel corporations and front groups, will meet in Chicago this week to discuss their next round of attacks on clean energy policies. The Center for Media and Democracy (CMD), The Checks & Balances Project (C&BP) and Greenpeace released ALEC’s confidential model bills and agenda ahead of their Annual Meeting taking place in Chicago, that include a new anti-clean energy model bill, “The Market-Power Renewables Act.”

“A little sunlight is a powerful force for good. ALEC is trying every trick in the book to keep the agenda of their upcoming meetings secret,” said Nick Surgey of The Center for Media and Democracy. “They are even claiming every state’s public record laws don’t apply to them. This is preposterous. The ALEC documents that CMD obtained show that ALEC is continuing to scheme on behalf of fossil fuel corporations, working together to undermine state’s efforts to promote renewable energy production.”

“The Market-Power Renewables Act” will likely serve as the model for another round of attacks on state Renewable Portfolio Standards (RPS) in 2014 following ALEC’s failure to weaken or eliminate clean energy policies this year. The new bill would significantly weaken state clean energy laws by broadening the eligible electricity sources to include existing, large hydroelectric power plants, biomass, biogas and other sources of electricity.

“Fossil fuel-backed efforts to rollback clean energy laws in states across the country have failed, including in at least three critical battleground states,” said Gabe Elsner, Director of C&BP. “It’s no surprise that ALEC is pushing a new model bill that would eliminate incentives for in-state investments in clean energy. These policies are boosting investment in the clean energy industry and creating jobs, which poses a major threat to fossil fuel interests.”

Despite a robust lobbying effort from fossil fuel corporations and fossil fuel-funded front groups, ALEC and its allies lost in the critical battleground states of Kansas, North Carolina and Missouri. Bipartisan majorities defeated ALEC’s model legislation this year, after ALEC legislators in at least 13 states sponsored or co-sponsored legislation to weaken or eliminate RPS laws.

But despite complete failure in 2013, ALEC’s Energy, Environment and Agriculture Task Force Director Todd Wynn indicated that attacks on clean energy laws would resume in 2014.

“Fossil fuel-funded front groups connected to the Koch-funded State Policy Network and ALEC advocated to repeal or weaken RPS laws in at least 14 states,” said Connor Gibson of Greenpeace. “Many of these front groups published flawed economicreports written by the fossil fuel-funded Beacon Hill Institute to inflate the cost of RPS and ignore the economic benefits of the pro-clean energy laws.”