A new ethics complaint has been filed against Taft Stettinius & Hollister LLP (“Taft Law”), and editorials by the Columbus Dispatch and Toledo Blade call for a re-do of the investigation into Ohio House Majority Leader Bill Seitz’s inappropriate conduct.

The investigation — first reported by Checks and Balances Project (C&BP) — was initiated after a complaint filed by a staffer, who alleged that the powerful legislator’s comments at a good-bye event for a departing House staffer were sexual harassment meant to intimidate victims. The complaint also gave indications of a broader culture of harassment throughout the House.

Taft was assigned by Ohio Attorney General Mike DeWine to act as special counsel to the Ohio House of Representatives to investigate the sexual harassment complaint. Ms. Silverstrim maintains that multiple conflicts of interest “undermine the public’s confidence in the investigation and the integrity of public office holders.” 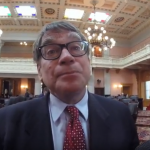 In clearing Seitz, lawyers from Taft Law concluded the investigation after interviewing only two people besides Seitz, then charged taxpayers $12,000. Investigation records show no evidence the Taft lawyers made an effort to speak to any female staff members.

Silverstrim also asks the Disciplinary Counsel to determine if there was an improper “pay to play” scheme associated with the appointment of Taft.

Meanwhile, the Columbus Dispatch said in an editorial on July 3:

“[T]he House leadership’s mode of investigating the complaint leads one to suspect that the institution isn’t very serious about holding powerful men accountable….

“Seitz’ association with the firm is well known; apparently no one thought it important to avoid. That suggests leaders didn’t take the probe very seriously, and coming at a time when the #MeToo movement was dominating national discussion, that’s tone-deaf and offensive.

We note that C&BP has asked House leadership for months what steps they were taken to ensure Seitz’s conduct wasn’t part of a broader pattern. The so-called “investigation” of Seitz falls far short of providing any answers and needs to undertaken again by investigators without conflicts who seek the truth.

“Why Would Anyone Report Their Harassment to Their Legislative Employer If They Were Just Going to Be the Object of Amusement?”